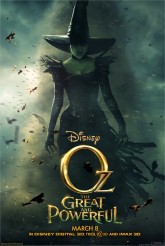 Although the most famous by far of L. Frank Baum’s books is THE WONDERFUL WIZARD OF OZ, the author actually wrote fourteen OZ books total (as well as a number of other titles), which had storylines and characters that continued one to the other, albeit none had cliffhangers. The OZ books have not only great imagination but tremendous warmth, valuing friendship, loyalty and courage in ways that make sense to children and adults alike.

Perhaps the best compliment that can be given to OZ THE GREAT AND POWERFUL is that Baum would likely have approved of this film, though its interpretation of his famous Wizard is something neither the author nor the famous M-G-M musical THE WIZARD OF OZ ever seems to have contemplated. Yes, James Franco’s Oz (the nickname he goes by, short for Oscar) is a carnival conjurer and con man, but he’s also a dashing youngish womanizer when we meet him as he puts on his show in turn-of-the-century Kansas. He is astonished – though we’re a bit less surprised – when, after he dives into the basket of a hot-air balloon for protection from an angry strongman, the contraption is blown away in a cyclone.

OZ borrows WIZARD’s gambit of beginning in black and white and turning to color once we and our protagonist reach that fabled land. OZ does the old movie one better by also switching from 4:3 to widescreen. Oz soon learns that he and this strange new world share a name and that he’s been prophesized to save the place from enslavement and destruction.

Since we have a pretty good guess from the overall tone, the Disney involvement and other aspects of the movie that this is indeed intended as a prequel to Dorothy’s adventures and that Oz isn’t going to fall to total ruin, we expect Oz the character to succeed, even if he doesn’t. The screenplay by Mitchell Kapner and David Lindsay-Abaire, based on Kapner’s screen story, is fairly ingenious, taking what we know of both Oz’s background and some of his favorite tricks from the book and using them in new and organic ways to further the story.

There’s a romantic element here that’s foreign to the books (secondary characters fall in love, but the main characters don’t), but it’s handled with a kind of gentleness that makes it fit the rest of the movie.

Director Sam Raimi displays his customary vigor and vitality – there aren’t many dull or visually uninteresting moments here – but here he also displays a kind of friendly sweetness that matches the source material. There are no gags about harm to innocents and even the villains have understandable motivations well beyond “wickedness,” albeit they tend to overreact hugely to slights real and perceived.

Franco is an amiable presence as Oz, with a twinkle in his eye and a flair for turn-of-the-century showmanship in his manner. The only problem is that the script calls for someone who, deep down, is yearning to be a good person, and Franco doesn’t convey a sense that his Oz is deep down yearning for much of anything. He’s an entertaining companion, but there’s something missing here that prevents OZ from playing all of its intended emotional notes.

No such complaints here about Michelle Williams, Rachel Weisz and Mila Kunis as the witches of Oz whom we meet throughout the course of the story. There are doubtless spoilers galore out there about which witch is which, but if there’s a way of avoiding the information, the discovery of their various identities adds to the experience. All three actresses commit entirely to what they’re doing, and all combine mythic archetypes with accessible individuals.

Stories about Oz in the Baum books are always stories about friendship forged, tested and tempered with adventure, and OZ does not disappoint on this front – our hero gets a set of traveling companions who are unique, apt and supply both well-earned laughs and pathos. (For those wondering, the China Country is a part of the first OZ novel, though it’s not employed the way it is here.)

The 3D is what most 3D is at present – it’s pleasant, unobtrusive and doesn’t add much to the proceedings.

Overall, OZ THE GREAT AND POWERFUL is good and effective. It could be better, but it feels like part of the OZ most of us know and love, and that fact lives up to the “Great” in the title.

Related: Interview with the witches of OZ THE GREAT AND POWERFUL