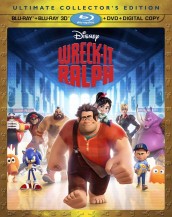 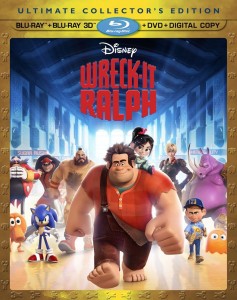 WRECK-IT RALPH – Another winner from Disney and a pretty unique animated film about a bad guy in a video game called Fix-It Felix that yearns to be something more than the guy who just does damage to a bunch of 8-bit characters home and longs to be the hero he knows he can be. The problem is that as his name goes, all he does it wreck stuff with his hammer-type hands But when Ralph (John C. Reily) crosses video games into Heroes Duty, he finally gets the medal for heroes that he so has been searching for. Unfortunately, that results in Ralph being launched into another video game called Sugar Rush where he and an alien spawn arrive and he discovers a little girl, Vanellope (Sarah Silverman), that has her own dreams that she hopes can be accomplished with Ralph’s medal.

Meanwhile, Felix from Ralph’s game and the protagonist from Heroes Duty (played hilariously by Jane Lynch) search for Ralph and hope to stop the alien spawn from infecting the Sugar Rush game and causing it to be pulled from the arcade they live in. With a slew of cameos from classic games such a Q-bert, Pac-Man, Space Invaders and everything in-between it is a throwback animated film that has as much for adults as it does for kids watching. On Blu-ray and Blu-ray 3-D it looks even better. Highly recommended for anyone that has children as it has plenty for them to enjoy – from video games, to candy, to silly characters and a good overall moral. 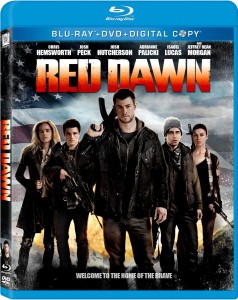 RED DAWN – Video game makers have made a point in recent years to capture as much of CALL OF DUTY as possible, as the venerable first person shooter franchise has been extremely popular and profitable for those making a new game every year. Now, it appears that Hollywood is trying as well. RED DAWN is supposedly the remake of the classic 80s film where a small town is invaded as part of a larger scale invasion of the United States during World War III. Shelved for many years, this DAWN is more about not trying to offend anyone rather than not giving a sh** in the original. Are they the Chinese? Are they North Korean? Or are they just random dudes attacking the U.S. because hey why not? The action is fine. The production is fine. But there is just nothing interesting here and all the heart and struggle that capsulated the original is completely replaced with just bland shooting and major, unforgiveable plot holes. A rental at best. 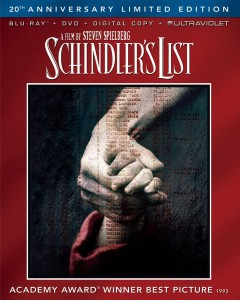 SCHINDLER’S LIST: 20TH ANNIVERSARY EDITION – There is no film that makes me ball like a baby such as SCHINDLER’S LIST. Steven Spielberg’s masterpiece in documenting the plight of the Jews during World War II and the true story of Oskar Schindler who begins using Jews as his work force in order to make money during the war only to discover the horrors that is being placed on them and does whatever he can to save as many as he can is a powerful, sad and moving film that deserves all the praise it has received in the past 20 years. Now, for the first time, it is available in high definition and has been remastered from the original source material using the latest technology. Offered up as a combo pack with both the Blu-ray, DVD and digital copy included, it is the height of some actors’ career including Liam Neeson as Schindler and Ralph Finnes as the brutal Nazi concentration camp commander and Ben Kingsley as Schindler’s caring and cunning accountant. Must own. 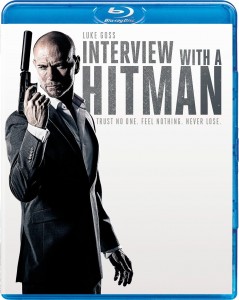 INTERVIEW WITH A HITMAN – Based on the cover alone you might think this has some sort of ties to the video game franchise, HITMAN, however, it does it not. Luke Goss (of the DEATH RACE sequels fame) plays Viktor a ruthless assassin that has decided to tell his story to an aging movie director looking to cash in on one last big film in a documentary on organized crime. He begins with his initial plodding into the world of organized crime in Romania and later to joining a mysterious organization where, of course, things go bad and he is forced to go on the run from his former employers. Well Go USA has become one of the forefronts to putting out bad movies straight-to-video. Some good, some bad. This one is the former as it really has nothing of value here other than a slick production and some decent acting from Goss. 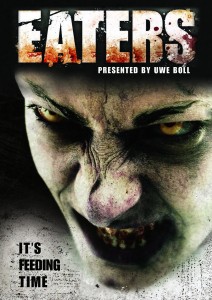 EATERS – Uwe Boll takes a break from ruining all of the video game franchises he can get his hands on to go back to his roots of creating half-decent horror flicks. EATERS is a decent zombie film import that is pretty low on action but high on a lot of talking between the two main characters that meander throughout a zombie apocalypse meeting cults, Nazi followers and zombie painters. But Boll is good at making even the worst written film actually look good and he does it here with high production values for a film that is on a modest budget at best. The gore is laughable and the zombies are few and far between and seem pretty unstoppable, yet, two military types seem to navigate the wastelands pretty good and kill a lot of time doing and gathering very little to survive. Still, might be worth a Netflix viewing or rental if you have nothing else in your queue.