exclusive interview with witches of oz the great and powerful 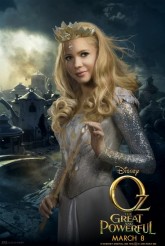 Interview: Getting wicked with the witches of OZ THE GREAT AND POWERUL 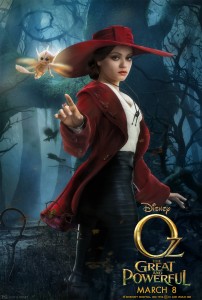 Mila Kunis in OZ THE GREAT AND POWERFUL poster | ©2013 Disney

OZ THE GREAT AND POWERFUL continues to rule the boxoffice as easily as Oz (James Franco) himself rules in the Emerald City. Before the film opened the very talented actresses that play the three witches of the movie spoke of their witchy roles. Michelle Williams plays Glinda the Good Witch, Rachel Weisz is Evanora Witch of the East, and Milla Kunis is Theodroa Witch of the West.

All three of the actresses had a good time making the movie, and not a single one of them didn’t enjoy being in wires and flying about the sets.

“I think we all really loved being on the wires,” explains Williams.

Weisz backs her up in adding, “Yeah, it was very fun.  It was a little scary the-the first day.  We had a rehearsal period with these wonderful stunt coordinators who had worked extensively with Sam [Raimi] on the SPIDER-MAN films.  So they were all experts in making people fly.”

“I mean, apparently I like it because I keep doing movies that require wires so I guess I had a great time,” laughs Kunis.  “The truth is it’s not hard.  It’s really not hard to be wired and to have somebody else be responsible for the wire work and your life.  Your only responsibility is to sustain seventeen hours on those wires.”

Aside from flying about on wires the actresses did have different elements of the production that were their favorite things. Of course, those things are about as night and day as you can get, but when you’re dealing with a good witch and a couple of not so nice ones; people on set tend to react differently to each. 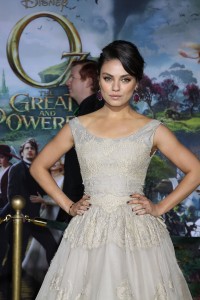 Michelle Williams enjoyed the adoration of the younger members of the cast and says her favorite thing is, “Making little girls smile when you walk by.”

Rachel Weisz enjoyed the ‘magical’ side of being a witch in saying, “Flying!  Number one.  Number two-lightning bolts for me.” She then reacts to Williams comment about adoring children and shares her own version of an on-set fan club.

“My winkie guards were very fond of me,” Weisz laughs.  “On the last day, when I kind of ran off and they had more shooting; they were all like in unison, ‘Bye, Evanora!’  Like I was their leader.” 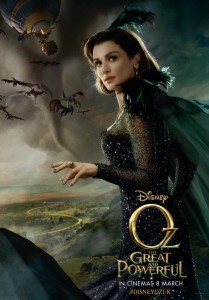 Rachel Weisz in OZ THE GREAT AND POWERFUL poster | ©2013 Disney

As far as Kunis was concerned, she just enjoyed the freedom being a witch gave her.

“As far as playing a witch, it’s fun,” Kunis explains. “It’s fun to play somebody that has no boundaries, that has no rules.  There’s no book you can read on how to play a witch so you kind of just create your own version thereof.  It’s really great!”

And of course, as with all productions this lavish, the conversation turned to the amazing costumes that the women got to wear as the various witches of OZ. It was surprising to find that they actually had input into their outfits, and sadly no of them got to keep the dresses once shooting was done.

“I didn’t actually ask to keep mine, I don’t know where I would wear that dress,” laughs Weisz.  “I don’t have the right life for that dress.  I would like to have that life.”

She goes on to explain that the costume evolved from an early version of rehearsal and screen tests to what it ultimately became in the film.

“My character looks a bit like a bird of prey and slightly militaristic and via Las Vegas or however you want to see it,” says Weisz.  “So myself, and the costume designer, spent a couple of weeks in a room and I cooked up this costume, which I brought to the first screen test, where basically I looked a little bit like the Duchess of Windsor.  It’s this little green dress and a little crown and it was this height of my character who just desperately wanted to be queen.  And Sam looked at it and just said, ‘It’s just not right.  You need to go back to the original thing.’  But he kind of let me go-it was like part of my process, I think.  It was me finding my desire to be a-to be queen.  I wanted to be queen.” 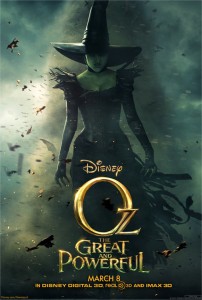 Michelle Williams also had some input into her character’s costumes, especially when it came down to going to war.

“I just remember I had the idea that Glinda needed to change her dress to go into battle and that she needed something that she could move more freely in and that she needed something that looked like armor,” explains Williams.  “This was after we had already shot something of me in my other dress doing something in battle. I came to Sam, and I told him it was really important to me and I knew what it should look like and Sam is as accommodating to say, ‘if it means that much to you, then it means that much to me,’ and we got to re-shoot something once I had this new dress!”

So there you have it straight from the mouths of the witches of OZ themselves! It’s fun to be a witch. You get to wear elegant clothes, fly around, and do pretty much whatever you want! Check out OZ THE GREAT AND POWERFUL playing in a theatre near you now, and if you want to dress like the ladies of OZ check out the Disney store or Disney Store online for some unique OZ fashions you won’t find anywhere else.

Article Source: Assignment X
Article: Interview with the witches of OZ THE GREAT AND POWERFUL

Movie Review: YOUR HIGHNESS
CD Review: A LONELY PLACE TO DIE
TCA News: CBS confident for a ninth season of HOW I MET YOUR MOTHER
Movie Review: ANTEBELLUM