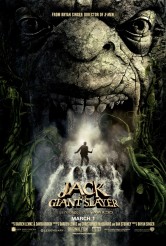 Middle Earth-adjacent, but not as immersive

First of all, let’s clear up one misconception that may or may not be popular: JACK THE GIANT SLAYER isn’t a hyperactive attempt to soup up the tale of Jack and the Beanstalk (at least, not wholly), but rather a marriage that familiar myth with a slightly less well-known but still famed folktale from Cornwall. In the lore, giants were marauding up and down the coast, stealing farm animals and occasionally eating people, and Jack went around slaying these large miscreants.

The new film JACK THE GIANT SLAYER actually dispenses with much of the Jack the Giant Slayer lore, turning Jack into a young man who, as a boy, loved reading about the ancient days of his kingdom of Cloister. Hundreds of years ago, giants from the sky kingdom of Gantua came down, feasted on humans, stole treasure and generally were a public menace. Good King Erik forged a crown of one giant’s heart, which gave him mastery over the entire enormous race. He banished them back to Gantua. Over time, the story has become a legend and the crown is buried with the king.

Now-grown Jack (Nicholas Hoult) is sent by his uncle to sell horse and cart in the kingdom’s capital, where Jack encounters and impresses the beautiful and brave princess Isabelle (Eleanor Tomlinson). He then encounters a desperate monk who needs his horse and gives beans as collateral. Through a confluence of events, Isabelle winds up in Gantua and Jack joins a company of the king’s men in trying to rescue her. Alas, Princess Isabelle’s fiancé, the nobleman Roderick (Stanley Tucci), has stolen the giant-controlling crown and has proportionately-sized ambitions.

Exactly why director Bryan Singer wanted to do this isn’t entirely clear from the finished product. The screenplay, credited to Darren Lemke and Christopher McQuarrie (Singer’s old USUAL SUSPECTS colleague) and Dan Studney, from a story by Lemke & David Dobkin, seems to want to have a big, coherent mythology, but it’s as though somebody got in there and insisted on making tweaks, so that the giants don’t seem to be bound by the crown once they’re out of earshot – or something. This is exactly the kind of thing that a fantasy film needs be firm about if we’re going to believe the filmmakers have conviction, which they need to exhibit before they can convince us. Much of the movie looks like it wants us to feel like it’s taking place a shire or two over from THE HOBBIT, but it lacks the assurance that everything we’re seeing exists in some reality.

The production design is somewhere between what we expect of Peter Jackson and the Fantasyland section of Disney. The natural beauty of the giants’ realm is splendid, but the kingdom is laid out with uncommon tidiness.

The acting is a mixed bag. Hoult and Tomlinson are sincere, and Ewan McGregor as the gallant Sir Elmont seems to be enjoying playing a noble knight. However, Tucci’s villainous Roderick seems more suited to THE PRINCESS BRIDE than the slightly more serious tone here.

Roderick in fact is just one example of the movie’s uncertain sensibilities. There are a few honest laughs and some great fight sequences, but there are also jokes that don’t much work the first time getting repeated later in the running. There are moments of good fairytale wonderment, and then there are moments where it seems like rote scenes are being included because someone felt they had to be there, whether anyone wanted them or not.

The giants are motion-capture performances, with their leader portrayed by the ever-reliable Bill Nighy. They don’t look entirely jarring contrasted with the live actors, but some of the individual giants look squishy and one is such a blatant imitation of Gollum that it instantly yanks you halfway out of this film and into another. The 3D is fine, if unnecessary.

JACK THE GIANT SLAYER rolls along at a reasonable pace, though it has a couple of slow spots and false endings. It adds up to an entertainment that is simply okay, but not the epic fantasy that appears to be what was intended.

Related:Exclusive Photos from the JACK THE GIANT SLAYER premiere