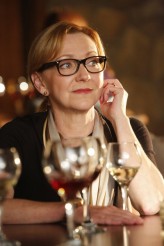 Exclusive Interview: Time to GO ON with actress Julie White 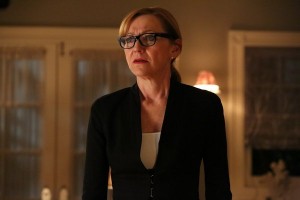 In NBC’s freshman half-hour comedy GO ON, Tuesdays at 9:30 PM, Matthew Perry stars as sportscaster Ryan King, who reluctantly joins a therapy group after the death of his wife. Laura Benanti plays group leader Lauren, who believes she is up to the task despite her relative lack of credentials.

Julie White plays Anne, another therapy group member who is mourning the death of her longtime partner. White, a native of San Diego, California, has a thriving career in stage, television and film – nearly everyone on Earth has seen her as Judy Witwicky, the mother of Shia LaBeouf’s character, in the first three TRANSFORMERS movies.

Poolside at a party thrown by NBC for their talent and the press at the Television Critics Association tour, White talks about GO ON and some of her recent film roles.

ASSIGNMENT X: You won the featured actress Tony Award for THE LITTLE DOG LAUGHED, you were in the TRANSFORMERS films – what brought you to series television at this time?

JULIE WHITE: You know, I’ve been a mom and my child finally went off to college, I was kind of an empty nester, and I did a lot of films. It’s funny, because I did two movies that are a hundred and eighty million dollar movies – or eighteen-thousand-dollar movies [laughs]. But I had been doing a lot of stuff where I kind of felt like a gypsy – you go on location and stay for a few months, and having done a series before, missed the sort of – you kind of form a little company when you’re doing a good series, and you get to sit down and be in one place for awhile. So I had asked my agents to look for one, and we started looking [in 2011], my agent here, Chris Schmidt from Paradigm, we started looking, we found one, but it didn’t get picked up, and then I did another one for USA that I loved, that one didn’t get picked up, so third time’s the charm. This script came to me and they just offered it to me and I feel really lucky. I hope it can find a life past these first thirteen and we can really do it for a few years, because I’d just love to do it. I’d love to have that experience.

AX: Did you know any of the people involved?

WHITE: I know [NBC executive] Bob Greenblatt a little, back from when he was at Greenblatt/Janollari and they produced Alan Ball’s show SIX FEET UNDER, which I did. I didn’t know [GO ON creator] Scott [Silveri] and it was his baby, but he’s one of the nicest people in show business, I think, that I’ve ever met. He’s so collaborative and so kind and you can tell from the show he’s just got a lot of heart.

AX: Did you have any feelings one way or the other about group therapy before starting this show?

WHITE: I’d never been in a group, but my mom is a therapist; [costar] Laura Benanti’s parents, I think, are both in some sort of a healing profession – I think they’re both counselors. So she has this really naturally therapeutic way just down pat, like therapy talk. I haven’t been in it, but I like the group. I think my character is a very highly educated and very smart person, but I don’t think she had been in any kind of therapy before, and one on one therapy felt too much for her, and she is hanging on to this group for dear life. This group is very, very valuable to her. So seeing the show through my character’s eyes, I think it’s a pretty good group.

AX: Did you have fun doing the TRANSFORMERS movies, or were you just going, “Wait, there’s a giant robot over there – what’s my eye line, what the hell is happening?”

WHITE: You know, I loved Shia and I loved Kevin Dunn and all my stuff was with those two guys, so the wacky Witwicky family, we have a really good time and in the second one, I had to do some of that crazy running around and things blowing up business, and that wasn’t my favorite, but I was really glad, I was like a kid in a candy shop. I was like, “Neat! Blow something else up, this’ll be cool!” I’m glad I got to have that experience, but it’s hard. It takes all day, you spend all day setting up this one thing and they have to be so careful, because it’s so dangerous. Improvising in a car is much more fun to me. They need to make MY LITTLE PONY: THE MOVIE, because I raised a daughter, so I know all about those toys.

AX: You spent four seasons on GRACE UNDER FIRE, 1993 through 1997. Do you feel making half-hour television has changed greatly since then or is it still pretty similar?

WHITE: It was funny, because the pilot I did last spring was a multi-camera sitcom, and that, I got back on the soundstage, and it was like, “Oh, my God, it’s exactly the same.” That formula for doing that kind [of show] with a studio audience is very much the same. But there wasn’t this kind of show, this filmed half-hour that we’re doing with GO ON. And this feels to me like making a little movie, making a little indie, because it has that indie feel, because you’re pushing. It’s like, “We’ve got to get this done, we’re going to run out of time, we can’t go into tomorrow.” So it really feels like making a small movie, a little indie feature. The network is being very supportive and generous and not breathing down our necks. They’re not on set giving you notes. It feels like we’re just making the best story that we can.

WHITE: I have two movies [that opened recently]. One is called LANGUAGE OF A BROKEN HEART, and that was a little indie feature I did with a super-talented young man named Juddy Talt, who is just out of USC and they snapped him up as a writer and as an actor, so this is his first feature. And then the other movie is called HELLO, I MUST BE GOING, which was shown the first night of [2012] Sundance, with the lovely Melanie Lynskey in the leading role. She is absolutely divine and she falls in love with a boy who is much younger than her, played by Chris Abbott from GIRLS. I play his mom, his stage mother. Then I played Elizabeth Blair Lee in Steven Spielberg’s LINCOLN movie, which is an adaptation of the Doris Kearns Goodwin book.

WHITE: No. Preston Blair was the founder of the Republican Party, and Lincoln was a Republican. And [Blair’s] daughter, Elizabeth Blair, married a Lee, but it was the Lee that was actually the admiral of the Union Navy. But it does show that Robert E. Lee ofVirginia had Lees in Maryland that fought for the Union cause while he fought for the Confederacy. But that’s a beautiful movie with Daniel Day Lewis asLincoln and Sally Field as Mary Todd and the great Tommy Lee Jones as Thaddeus Stevens. It was an awesome experience, it was really great.

AX: How was it being directed by Spielberg?

WHITE: Great. My first day on the set, he came in and just sat down and talked to me about twenty minutes about how much he loved Mom and Dad in the TRANSFORMERS movies, because he produced all of those films. It’s a weird trajectory to go from that [to LINCOLN].

AX: Is that how he knew your work, from producing the TRANSFORMERS films?

WHITE: He said he’d been looking for something for us to work on together and I think he knew – it was weird, when the second TRANSFORMERS movie opened, the day before it opened, I opened in TWELFTH NIGHT in Central Park, so I was opening in Shakespeare in the Park at the same time as that big crazy goofy movie. So he knew that was not all that I did, was dizzy mom parts. So he gave me a really nice part in his beautiful movie. I’m thrilled.

AX: Anything else we should know about GO ON?

WHITE: Tuesday nights at nine-thirty. We hope you’ll watch it. I think it’s really good. Put it on your DVR list.