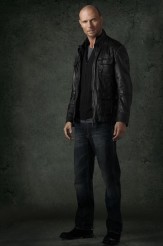 The actor also talks about working for Guillermo Del Toro 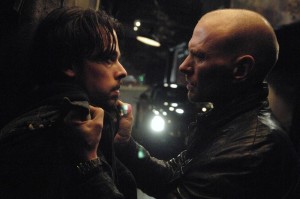 In RED WIDOW, ABC Sunday nights at 10, Radha Mitchell stars as Marta Walraven, a wife and mother. Although her father Andrei (Rade Serbedzija) is a Russian mob boss settled in the U.S., her brother Irwin (Wil Traval) works for him and her husband deals in marijuana, Marta has steered clear of the criminal world. Then her husband is murdered and Marta must work with her father’s rival Christian Schiller, played by Goran Visnjic, to track down the killer.

At a party thrown by ABC for the Television Critics Association, Goss talks about working for the mob on TV.

ASSIGNMENT X: Is Luther someone in whom still waters run deep, or does he just have a moral code of “family is everything”?

LUKE GOSS: I don’t know if as much a moral code – he’s definitely driven by a sense of loyalty, based upon the fact that Radha’s father in the show, Andrei, took me off the streets, gave me a position as an enforcer and I feel very grateful for that position in my life. So he’s driven by genuine loyalty. What you see with him is what you get. He’s definitely the real deal. That position [as an enforcer] becomes familiar to everyone in the family and the surrounding friends. Over the years, I become very trusted, and it’s an unusual position, because it’s not like a henchman or a right hand to anyone. It’s just somebody who’s there to oversee everyone and listen very closely. And as a result of Marta’s husband dying, I’m there pretty much to just watch over her. He’s kind of selfless, but he admires her. I think he has feelings for her. So that helps him force his commitment to her well-being, I think. It’s kind of beautiful from an actor’s point of view, because you can internalize that. It’s not particularly verbose, but that also assists character.

AX: You have less dialogue than the other characters …

GOSS: The wonderful thing about the role for me was that the lack of language was such a great assistance because of how the story unfolds. Melissa’s [Rosenberg, the show runner, who adapted RED WIDOW from the Dutch series PENOZA] writing continually led [the way]. Any angle you look at this story, there are things going on. There are things going on within my character [where] the lack of language is hugely compromising and challenging and suffocating at times, but in a wonderful way in a dramatic sense, which really adds, I think, another layer to the story.

AX: In the RED WIDOW cast, you have actors who are Australians, Serbo-Croatians –

GOSS: Brits – and a couple of Americans.

AX: Do all of you who are playing Russians have to get together and synchronize your accents?

GOSS: Yeah. Actually, I haven’t played an Englishman in a long time. It’s kind of interesting, because we spend so much time together in our scenes, and we’re hanging out, I think everybody has a kind of generic accent. That’s an interesting point, because nobody ever said to us that we should really sound like each other. And there are no real Russian accents in the show from the regular cast members. It’s called “RED WIDOW Russian.” There’s going to be a handbook out there, how you speak RED WIDOW Russian.

AX: Did you have to learn anything for RED WIDOW that you didn’t already know how to do?

GOSS: Not really. The only thing I suggested is a change from him being good at kung fu to maybe something less showy [as a martial arts style]. I made it more like a krav maga kind of thing. But just a set of skills I kind of had from the movies I’ve been making, and I just applied them to the character. I just wanted it to be more simplistic, so that’s why I went to more krav maga.

GOSS: I did BLADE II [as a vampire], I did HELLBOY II, in which I was an elf [trying to end the world]. I also do movies like ONE NIGHT WITH THE KING [as King Xerxes] – I play romantic leads now, and pretty much antiheroes. So I’ve done a bunch of guys that are fairly capable, yeah.

AX: You’ve worked with Guillermo Del Toro twice now, on BLADE II and HELLBOY II – how was that?

GOSS: I’ve wanted to direct for a long time now and working with Guillermo, it’s one of those things where you put [other ambitions] on the back burner, because he’s such an amazing filmmaker. I’ve never seen him guess, I’ve never seen him not know what he wants to achieve. He’s a filmmaker that really understands from the outset of the movie what he wants to achieve with it. When you read a script that he’s going to direct, you know you’re going to see something far greater than your imagination. That’s why I love working with him. I think of him as a friend and I think very highly of him.

GOSS: DEATH RACE 3 [now out on home video]. I’m very happy with it. I did DEATH RACE 2 [as well, playing the “Frankenstein” character]. These are prequels [ro DEATH RACE]. I have INTERVIEW WITH A HITMAN coming out, and a few other movies. I’m in a movie called DEAD DROP, which I’m really, really proud of. It’s a thinking man’s action thriller. It’s set in Mexico. I play an undercover CIA guy who’s lost his way a little bit, goes a little too deep. The movie starts with me falling freefall out of an aircraft with no parachute, which is kind of an ominous place to be, I guess, but it’s a very, very good film. With this show [RED WIDOW], it’s an exciting year, for sure.