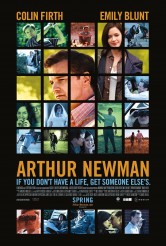 For those who have been in depressive funks or at least states of ennui so profound that they’ve produced fantasies of ditching it all and starting over, ARTHUR NEWMAN is here to play out the scenario. Writer Becky Johnston has constructed a hero who, having drifted into, through and out of a life he doesn’t relate to, embarks on a quest with not much more zest than he appeared to possess earlier. This makes ARTHUR NEWMAN a different sort of road movie, albeit not the most bracing example of the genre.

Colin Firth stars as Wallace Avery, who has an office job, an ex-wife, a girlfriend (Anne Heche) he doesn’t relate to very well and a teenaged son (Lucas Hedges) who feels that Wallace’s efforts to connect are too little, too late. Wallace fakes his own death and hits the road, heading for Terre Haute,Indiana, with identification that proclaims him to be Arthur Newman. Stopping at a motel, Wallace meets Michaela “Mike” Fitzgerald (Emily Blunt), a young woman with a lot of problems and secrets of her own. Despite his desire not to have baggage in his new Arthur Newman life, Wallace jumps in to help Mike when she’s threatened by real trouble, and a prickly push-pull relationship develops.

Firth and Blunt are fine actors and do spot-on Middle America accents, but there’s only so much performers can do about the overall pacing of a project. ARTHUR NEWMAN is slow and reflective, but we don’t find out anything very startling about the characters – yes, they have background details that inform them, but this gives us big character beats that we’re told about rather than shown. Likewise, Wallace’s goal for Arthur is a nice twist, but also one that seems as though it hasn’t been fully thought out, not just by Arthur, but by the filmmakers. When Wallace doesn’t foresee certain developments, it’s neither because he’s a cockeyed optimist or delusional about his past. He’s been pretty practical so far, so this story element seems at odds with how Wallace has been presented so far.

As for Mike, she seems realistically traumatized, so caught up in her own fears and shames that she can barely see outside herself. Blunt plays the balance between pain and flippancy beautifully, but again, it seems a little strange that she and Wallace, regardless of proximity, would strike up a relationship. Blunt is so attractive that we’d understand if this factored into Wallace’s desire to have her as a traveling companion, but he’s depth of denial about this is more flat than either moving or insightful.

When Wallace and Mike start to relax and come up with a very particular type of game to play with one another, it’s unclear if we’re meant to see them as genuinely loosening up; they’re having more fun doing minor rebellion than we’re having watching them, and we’re not quite sure where all of this is meant to leave them emotionally.

Director Dante Ariola captures the uneasy, unhappy-making feel of small-town motels and parking lots, grounding ARTHUR NEWMAN in the mood that the main characters are trying to escape. We understand their pain and their desire for something better. However, a movie about a man struggling mightily for internal change needs to be more psychologically acute than ARTHUR NEWMAN to command our empathy or even our full credulity. As it is, we feel bad for Wallace, but we come away not entirely believing in him or how he’s affected by what we see here.