He also talks about his new film K-11 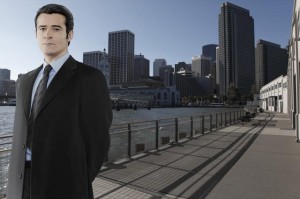 ABC’s RED WIDOW, Sunday nights at 10 PM, is based on the Dutch series PENOZA. In the U.S. version, adapted by executive producer Melissa Rosenberg, Radha Mitchell stars as the title character, Marta Walraven, a suburban wife and mom whose world turns upside-down when her pot-dealing husband is murdered. Marta winds up working with mob boss Christian Schiller, played by Goran Visnjic, in the hopes of finding out who killed her spouse and to clear her husband’s considerable debts.

Visnjic began his acting career in his native Croatia(then still part of Yugoslavia). He appeared in Michael Winterbottom’s 1997 feature WELCOME TO SARAJEVO, plus THE PEACEMAKER, ROUNDERS and PRACTICAL MAGIC before joining the cast of ER as Dr. Luka Kovac in 1998, staying with the role for a decade. During that time, he also played the lead in a TV miniseries version of SPARTACUS and opposite Jennifer Garner in ELEKTRA. More recently, he’s had recurring roles on LEVERAGE and PAN AM and stars in the just-released feature K-11.

Visnjic obligingly takes some time at the Television Critics Association press tour to answer some questions about RED WIDOW, plus one that occurs to most people who have seen the actor’s name in print but never heard it spoken aloud.

ASSIGNMENT X: What is the correct pronunciation of Visnjic?

VISNJIC: It’s going to go into that direction. We’re going to be working on changing a lot of things about him. Later on, we introduce his father, we introduce the whole of his history, how he actually became what he became, why he does what he does. They’re very interesting solutions that we came up with. He’s going to become a little bit impressed by Marta, by this housewife who starts into this crime world almost as my perk, almost as like my revenge [on] her father [played by Rade Sherbedjia] or [as a payment] her husband owes me, and then he going to be, “Wait a second. This is actually interesting. This might actually be even useful to me,” and they’re going to develop this professional relationship that’s going to kind of start breaking through his armor a little bit toward the end of this season. And then we can expect some very unusual things, some things like helping each other in, I would call it, unusual ways, so – put it this way, when Melissa [Rosenberg] and I talked at the beginning, it was not like, “Black and white, this is going to be a bad guy. This is going to be a bad guy who’s going to turn towards becoming one of the people on the show who’s going to work closely with Marta.”

AX: Does the role call for a lot of running, jumping, shooting, kicking …?

VISNJIC: Well, that was one of the aspects of the show that I actually loved, because Melissa tends to use pretty much everything I tell her about myself. We started joking – I said, “If I say, ‘Oh, I do this,” Melissa’s going to put it in the show.” So we have a lot of action sequences, kung fu and this and that. It’s going to be fun. It’s something I’ve never done before on TV.

AX: Did you have to learn how to do anything?

VISNJIC: No, because she actually stole from my life, so it’s like I’ve been done kung fu now for a decade, so she was like, “Oh, cool, so we can actually put this on the show.” Things like that.

AX: Specifically kung fu, as opposed to other types of martial arts?

AX: Was the stunt coordinator surprised by how much you knew already?

VISNJIC: Not so much. [Stunt coordinator] Danny Vertue and I worked closely for the whole season and we’ve become friends and so we kind of knew what we had and how to deal with everything, so it was actually quite fun. Next season we’re going to do probably more of that.

AX: You’ve done a couple of genre movies – you were in PRACTICAL MAGIC as an evil undead boyfriend and you starred in CLOSE YOUR EYES, which was a supernatural serial killer film. Do you have a fondness for genre?

VISNJIC: The thing is, I’m trying to find an interesting character. [Recently], I was in BEGINNERS, I was playing young Christopher Plummer’s lover, in THE GIRL WITH THE DRAGON TATTOO, I went with the gray hair – just something to shake it up, try to do different things. K-11 [which opened March 15] is a story about this music producer who ends up in jail after an all-night bender, he wakes up there and he doesn’t know where he is, and basically all hell breaks loose, and it’s a very interesting little movie done by Jules Stewart. It’s an independent movie that I’m really proud of, so I’m just trying to find a good script with good characters. I don’t care what’s the genre. Sci-fi, drama, comedy …

AX: Did you have any interest in mob stories before RED WIDOW?

VISNJIC: We’d been raised back home that acting is acting. There is no difference between theatre, TV and film, because the industry is so small. You can’t survive only in movies, because we make five movies a year in the whole country, so you work in theatre as an everyday job, and then when the movie comes, you go shoot a movie, when a TV [project] comes, you do TV. So like I said, it’s only about a good project – a good script and good characters, that’s the only measure.

AX: There are comparatively few actors from Eastern Europe – at least compared to, say, the U.K. and Australia – working on U.S. TV, but your RED WIDOW costar Rade Sherbedjia is also from the former Yugoslavia. Had your paths crossed before?

VISNJIC: We know each other from a long time ago – we met maybe twenty years ago. We know each other. He’s a great actor, very professional. We had only one scene together in the show, actually, so it was a fun scene.

AX: Is working in North America at all different from working in Croatia?

VISNJIC: Well, I’ve been here for a long time now, and the only difference would be the budgets. If you work in Croatia on a smaller production, it’s pretty much the same difference as here. Less money means a smaller trailer, not as good catering and stuff like that [laughs]. But hopefully, the amount of money goes into the production.

AX: But everybody approaches the work pretty much the same way?

VISNJIC: Oh, yeah. The professionalism is just about the same; [the difference anywhere is] the personalities of the people who work on the project.