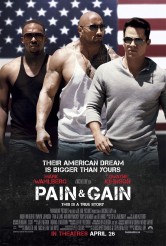 A true-crime black comedy, with authentic weirdness, although the tone and the events don’t wholly match up

The movie PAIN & GAIN touts itself as a true story, based on a series of news articles by Peter Collins that originally ran in the Miami New Times 1999-2000, about events that occurred (primarily in Miami) from 1994 through 1996. After reading the articles, one comes to the conclusion that this is a rare instance where, rather than exaggerating, the filmmakers actually held back on a few of the crazier aspects of the tale, though the magnitude of weirdness is still conveyed.

PAIN & GAIN begins with Daniel Lugo (Mark Wahlberg) doing sit-ups in a very public place, only to leap up and flee an impressive number of cops in pursuit. The film then flashes back to the previous year to show us how Daniel got into these straits. We see that Daniel is a bodybuilder who believes in the American Dream and self-help platitudes, though he doesn’t seem to grasp that the people who invented the concepts he holds so dear would have been appalled by his methods. Applying for a job at Sun Gym, Daniel promises owner John Mese (Rob Corddry) that he can triple the clientele in a matter of months – and is able to deliver. Daniel makes friends with fellow bodybuilder Adrian Doorbal (Anthony Mackie) and they both adopt new-to-town, born-again and massive Paul Doyle (Dwayne Johnson). Daniel insists that he is a “doer” (again, apparently ignorant of or indifferent to the law enforcement meaning of the word) and decides that he will gain the wealth he deserves by stealing it.

Now, Daniel doesn’t have any old target or any old plan in mind. One of the clients he trains, Victor Kershaw (Tony Shalhoub), is clearly wealthy. Daniel decides that he, Adrian and Paul should kidnap Victor and force him to sign over all his money and belongings – bank accounts, house, everything – to them. Victor, however, isn’t easy to capture, mainly because Daniel’s gang are not exactly smooth, or even competent, criminals. When at last they do get their mitts on Victor, he proves tougher than expected – and before jumping to conclusions about the film exaggerating what Victor (a fictitious name for a real kidnap victim) goes through, again, read the article.

All of this is just prelude to a narrative that plays out like one of Quentin Tarantino’s wilder crime chronicles, except that here, most of the insanity actually happened. This gives everything an extra jolt of intrigue, but at the same time, it seems to be something of a stumbling block, not because screenwriters Christopher Markus & Stephen McFeely and director Michael Bay are hamstrung by facts, but because they collectively can’t get their story in sync with their tone.

Some black comedies deftly craft oddly likable characters that do horrible things. IN BRUGES, for example, finds sympathy and laughs for a couple of hit men on the run. However, PAIN & GAIN tries to have too many things too many different ways. It seems that we are meant to see Danny’s cockeyed notion of the American dream as simultaneously endearing and laughable, but his actions are so cumulatively monstrous that we can’t maintain this view. At the same time, the film isn’t crafted in a way where the laughs appear intended to catch in our throat, because the actors are playing straight-out comedy. There are authentically funny moments, but they flicker in and out, connected by a tissue of moments that seem to be intended to be much funnier than they are.

Then there’s another shift when Ed Harris enters the film. Rational and decent, the film strains to pull him toward center screen, but he doesn’t get enough time.

PAIN & GAIN has multiple narrators, a choice that is interesting, though it doesn’t provide either the levity or the depth that the movie needs. The movie wants to at once induce a measure of empathy for the protagonists’ ambitions while at the same time denouncing their stupidity and greed, and getting us to laugh at their terrible planning skills while simultaneously noting that their actions are monstrous. It’s doable, but it doesn’t work here

Even so, PAIN & GAIN is worth seeing. Some of the performances are strong, but what’s really worthwhile here is the narrative. There’s a moment where a supertitle reminds us, “This is still a true story.” Checking the moment against the article, it turns out that this you-have-to-see-it-to-believe-it incident is factual. You may or may not laugh, you may or may not like the characters, but you won’t be bored and you will exit the theatre amazed, if not actually stunned, by what unfolds here.