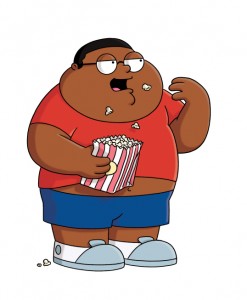 Seth McFarlane’s animated FAMILY GUY birthed a spin-off four years ago, THE CLEVELAND SHOW, moving the supporting neighbor character Cleveland Brown, voiced by Mike Henry, to his own series which recently finished its run on Fox and is now airing reruns on the Cartoon Network.

Cleveland’s prepubescent son Cleveland Junior and his redneck neighbor Lester are both voiced by Kevin Michael Richardson. Richardson’s resume as a voice actor spans over twenty years, including feature films (LILO & STITCH, TRANSFORMERS 2, additional voices in STAR TREK INTO DARKNESS), television (MONSTERS VS. ALIENS, STAR WARS: THE CLONE WARS as Jabba the Hutt, the Joker in BATMAN) and videogames (BATMAN: THE BRAVE AND THE BOLD, KINGDOM HEARTS: BIRTH BY SLEEP), as well as live-action roles in such projects as ER and CLERKS II. With all that, THE CLEVELAND SHOW is one of Richardson’s favorite gigs. He’s also enjoying playing Master Shredder on Nickelodeon’s reboot of TEENAGE MUTANT NINJA TURTLES.

ASSIGNMENT X: Had you worked with THE CLEVELAND SHOW creator Seth McFarlane prior to this?

KEVIN MICHAEL RICHARDSON: Yes. I did a lot of guest roles on FAMILY GUY. So he brought me in a bunch of times. I was like Bill Cosby, the singing butler – I did so many different characters on the show, so I had no idea that he was going to bring me along to do THE CLEVELAND SHOW, so that was a lot of fun.

AX: How quick is the production schedule for the voice cast?

RICHARDSON: We recorded about one a week – we do a table read, and then we record one a week. And of course, it takes a little while before they start kicking them out, so these guys are on the ball, they’re not playing around.

AX: So are they recording a bunch of episodes so that they can then hand a batch over to the animators?

RICHARDSON: Absolutely. We are cranking them out.

AX: Did they show you sketches of the characters when you started, so you had some idea of what these people look like?

RICHARDSON: You mean for the audition for the characters? Yeah, they showed me a picture of Lester, because I was cast as Lester the redneck neighbor before I was cast as Cleveland Junior. They showed me the picture and I said, “Oh, I know who the redneck is,” because I grew up with rednecks [laughs], so it was no problem. And Cleveland Junior – when I saw his picture, I pretty much sized it up and knew what to play. He’s a combination of a character that I did on ER the very first season named Patrick. He was mentally challenged and he had a football helmet, and I used that voice and combined it with what Mike Henry as Cleveland would sound like if he was younger, and [does voice] that’s how I came up with Cleveland Junior. So that’s pretty much how it happened there.

AX: Had you ever played either a very small kid or a redneck before?

RICHARDSON: I think I played a redneck somewhere in the past, but I can’t remember when and where. I’ve definitely played little kids before, definitely little characters.

AX: Is there any particular way you have to psych yourself up to do that?

RICHARDSON: Once I get in a room with the rest of the cast members who are pretty zany, it gets pretty easy to do. It’s just a lot of fun. We start rolling, we start doing the script and then we start improvising and that’s all she wrote. And I might have to squeeze my nuts a little bit for Cleveland Junior [laughs], but it works out okay.

AX: Do you  do any other characters besides your regulars, Lester and Cleveland Junior?

RICHARDSON: Yes. [laughs] They throw about fifteen of them at me at least per table read. So if I’m not doing Lester or Cleveland Junior, I’m doing Barack Obama, James Gandolfini, all these different characters. You name it, they just throw them at me. You have no idea what you’re going to get.

AX: Have you done any women or bears yet?

RICHARDSON: I haven’t done any bears, but some women on the show, definitely [laughs]. Auntie Mama has an alternate personality who is a guest, but they wanted a deep Barry White [he does it] kind of voice like this, and then they had me bring other guests, which are like Sister Girl [high voice] – “I talk like this, baby, how you doin’?” Stuff like that. So they throw a little bit of everything at me. I don’t know who I am, basically. 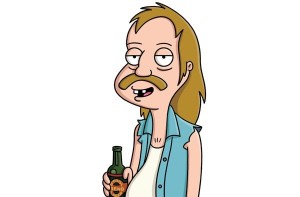 Lester from THE CLEVELAND SHOW | ©Fox

AX: Do you come out of the recording sessions thinking, “What do I actually talk like?”

RICHARDSON: Yeah. They have to play back to me what I did, and then I remember, and then it works out.

AX: On FIREBREATHER, you’re the father of a human-looking kid. How does one sound as a dragon?

RICHARDSON: Let me see. [very deep voice] Something like this. [normal voice] I barely remember. It’s been so long since we recorded it, but I like what they did – I think they affected the voice a little electronically, and it just was nice. I liked playing it.

AX: Do you voice more humans or nonhumans?

RICHARDSON: Nowadays, it’s more humans. But when I was just starting in the business, it was a lot of monsters. But right now, I’m just happy playing a lot more humans. It’s easier on the throat, so I’m happy.

AX: You were also the voice of the Joker on an animated iteration of BATMAN.

RICHARDSON: I was the Joker on the kids’ WB for about two-and-a-half years. It stopped, because [they had a different] Joker in BATMAN: THE BRAVE AND THE BOLD. I played Black Manta in that and some other characters, but not the Joker, who I really miss.

AX: Was your Joker the very angular one with the very long chin?

RICHARDSON: The green dreadlocked hair and the straitjacket, yeah. He was [does voice], “I was feeling a bit screw-loose, so I checked myself in” [maniacal cackle].

AX: What are you doing now besides CLEVELAND SHOW?

RICHARDSON: I’m Kilowog in the GREEN LANTERN animated series. I’m Maurice on PENGUINS OF MADAGASCAR, the television animated series on Nickelodeon – I know I’m forgetting something else. I play Bulkhead on TRANSFORMERS PRIME, and we’re waiting to see what happens. Rumor has it that the Hub is bringing us back, but it’ll be on a more standard animation format instead of CGI. CGI is very time-consuming, it’s a lot of work, lot of money, too. But the final product is always just fantastic. I’m also working on the new TEENAGE MUTANT NINJA TURTLES – I play Shredder on that – so I’m really excited about that. The success from that show is great, too, so I’m really happy about that.

AX: On TMNT, do you get to do sessions with the other actors in the room?

RICHARDSON: Yeah, we do, and actually we don’t do a table-read, we just go straight into the recording with a script, and Rob Paulsen is there, Greg Sikes, Jason Biggs, Sean Astin – it’s a high-powered cast. They’re a lot of fun. It’s a pretty blue cast, too, so we goof off quite a bit. It’s hard getting through the record, but it’s awesome.

AX: So might there be the R-rated DVD release?

RICHARDSON: Behind the scenes? Yeah, that’d be good. But you’ve got to remember, with TEENAGE MUTANT NINJA TURTLES, the comic book, when it came out, it was really graphic. It wasn’t like they were sweet, lovable – they were really tearing people apart and the language was brutal. It was a different theme entirely. But I love where it went, on a level where everyone can enjoy it. I’m doing a new show for Disney called THE 7D, which is the Seven Dwarves, and I play Happy in that. So I’m getting around. A couple of other things too – a movie called SHERIFF TALLY, I play a character called Uncle Bun and Farmer Stinky, so they’ve got me kind of running around.

AX: In 7D, are you looking forward to playing Happy, because he’s such an iconic character?

RICHARDSON: I absolutely am. I had no idea that I would be playing a dwarf [laughs], let alone one of the Seven Dwarves, so the crew’s excited. [The series is] for Disney.

Tom Ruegger, who created the show, who also created ANIMANIACS, TINY TOONS, PINKY AND THE BRAIN, he’s behind it.

AX: Is this that kind of humor?

AX: Any live-action work coming up?

RICHARDSON: You know, my wife and my friends have been pushing me to get back into it, so that may happen this year.

AX: Do you approach THE CLEVELAND SHOW with any kind of a different attitude or any kind of different technique than you do, say, TRANSFORMERS?

AX: So you prepare when you have time to prep and you just catch flyballs when you can’t?

AX: Do you do the voice work any differently for CG than you do for 2D?

RICHARDSON: Basically, the same thing. The only thing that heightens the character for us is the animation, which is really quite spectacular.

AX: Do you collect toys of your characters?

AX: Do the production companies send the toys to you?

RICHARDSON: Sometimes they do. You know how it is. Sometimes you’ve got to buy your own things, so I always try to grab all my toys. It depends on how many the missus will let me slip in. I wouldn’t mind getting some SPONGE[BOB] cash, like my friend Tom Kenny. I love that guy, too. He’s a great guy.

AX: Do you like to watch your own work?

RICHARDSON: I’ll record something, and I won’t see it until it airs the next year. [By then] I forget, usually, everything.

AX: Do you laugh when you see it again later?

AX: How do you feel about the end of THE CLEVELAND SHOW?

RICHARDSON: I have to tell you, I’m happy how far we came, I really am.

RICHARDSON: That I love all the fans for supporting me, all my friends on Twitter, all my friends on Facebook, I say thank you so much for your support, and all the ones that I’ve never heard of that are out there, just keep in touch with the kid in you, keep on watching and keep on laughing. And as a buddy of mine, Rob Paulsen said to me once, “Laughter is the best medicine – and you can’t o.d., and the refills are free.”