Exclusive Interview: David Bradley becomes the 1st Doctor for AN ADVENTURE IN SPACE AND TIME – Part 2

Not the actor's first foray into the world of WHO and hopefully not the last! 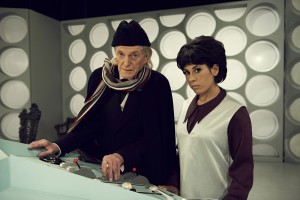 Actor David Bradley has had pop culture fame for years. He was Argus Filch in the HARRY POTTER film franchise, and he was Walter Frey in HBO’s GAME OF THRONES television series. More recently he could be seen alongside 10th Doctor, David Tennant, in BROADCHURCH, and now he is appearing on our TV screens as the first Doctor William Hartnell in DOCTOR WHO AN ADVENTURE IN SPACE AND TIME. Bradley was a fan of the original WHO series, remembers when it started fifty years ago, and his resemblance to Hartnell is uncanny. So what makes it exciting for a fan of the show to get to play in the world of DOCTOR WHO? Take a read as Bradley continues his discussion with ASSIGNMENT X about becoming the first Doctor, back on our screens for the very first time!

ASSIGNMENT X: Did you watch DOCTOR WHO, and did you have any kind of connection with the series before you took the role of William Hartnell, the First Doctor?

DAVID BRADLEY: Yes, I’m old enough to remember when it started, and I watched it with my family and we were all into it, and I kind of kept in touch with it. I saw John Pertwee, and Patrick Troughton, and Tom Baker. I didn’t see every episode, but I’ve kept in touch with it over the years, never thinking. Then when I got to play in “Dinosaurs on a Spaceship” a couple of years ago it was a great part and I got to work with Matt (Smith) and I enjoyed it and I thought that’s it, I’ve gotten to do DOCTOR WHO and that’s my DOCTOR WHO experience. Little knowing this was going to be coming along.

AX: So did you jump on the opportunity when it came along for AN ADVENTURE IN SPACE AND TIME?

BRADLEY: Oh absolutely. No one else was going to play that part. I knew it when I read it. I knew Mark Gatiss’ work before from seeing it, and I had worked with the director Terry McDonough in Manchester fiver years ago. When you have people like that around you, you know you’re in good hands and you know it’s going to look good. I loved the script and the fact that it covered William Hartnell’s personal life as well as re-creating the scenes from DOCTOR WHO. I think that even if you’re not a DOCTOR WHO fan, it’s always interesting to look behind the scenes and see what goes into the making of something; especially when it’s so touch and go and it was at the beginning when it nearly got pulled off the air. Thank goodness for Verity Lambert and her passion and drive for this show. She’s the real hero to me. She’s the one that pushed it. Hartnell in his initial reluctance thought he was dealing with a bunch of kids, and then soon realized he’d come across someone who would share his ambition for it. That was when he embraced it and he knew it was a career changing part. That brought him into millions of homes. Nothing like that had happened to him before on that scale.

AX: The movie starts with the creation of the show, and then goes to the regeneration into the second Doctor, is that the scope of it?

BRADLEY: Yes it goes to the hand over. Him leaving and not wanting to leave it. It kind of broke him in a way. He realized that his health was failing and that he didn’t have the energy to do it anymore. There were mountains of dialogue every week, forty-eight weeks a year and he had trouble remembering them because of the condition he had which is called arterial sclerosis. It was a condition that affected his blood flow to the brain and it’s really sad that that happened. I think that’s something every actor dreads, myself included, because when that happens you become unemployable.

AX: Since you grew up with DOCTOR WHO, was it exciting to be on the re-creation of the original TARDIS set and getting to work with classic Daleks?

BRADLEY: Oh wow yes! The set had only arrived just before they started shooting and he wanted to know when the set would be ready because he needed to know how to work all of the buttons on the console. He wanted to know what they all did because he didn’t want to press a button one week to open the doors, and he knew children being very bright would be able to spot if he wasn’t pushing the same buttons week to week to do the same things. It takes away the reality of it and he wanted to get it absolutely right so he learned every button on that console.

AX: What was the best part of coming and doing AN ADVENTURE IN SPACE AND TIME?

BRADLEY: William Hartnell was a great part to play. He wasn’t a two-dimensional character, he was a real actor with problems and he had a very complex personality. I found out a lot about him when I was researching the part. He had various sides to his personality; some good and some that were unacceptable at times. He would blow up if things weren’t right. I like the idea of playing someone that complex. As an actor you don’t want to play someone who is predictable. That was the best thing for me.

AX: Would you be willing to become the First Doctor again for the current series, since you’ve played him now and know all of his speech patterns and mannerisms and everything about him?

BRADLEY: If they wanted to do that and asked me, I think I would jump at it as well! The idea of completing the circle by starting with him and coming back to him, I’d never thought of it like that.