Home » kiss of the damned soundtrack 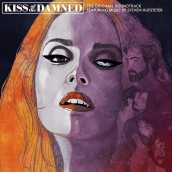 A new wave of artsy filmmakers are paying tribute to the pop art Euro-horror movies of the late 60s and early 70s with AMER and BERBERIAN SOUND STUDIO whose Shagadelic scores at least succeeded in being enjoyably tributes to the likes of Ennio Morricone, Fabio Frizzi and Goblin. But there’s a big difference between creating an impressive, intellectual music exercise for homages that don’t cinematically get it for all of their arch hipness. But for Xan Cassavetes’ infinitely more successful KISS OF THE DAMNED, Steve Hufsteter has come up with a score that has real retro heart. John Cassavetes talented daughter riffs on any number of Jean Rollin erotic undead movies here (whose titles teamed VAMPIRE up with such words as RAPE, NUDE and REQUIEM) for a smoking ménage a bloodsucker that embraces the aesthetic while being its own movie. Ditto the uncondescending, truly groovy Gothic quality of Hufster’s music for today’s mod night traveler.

Having done an equally great job recreating Spaghetti Western-isms for MACHETE, ONCE UPON A TIME IN MEXICO and Cassavetes’ debut documentary about LA’s cult Z Channel, Hufsteter is best recognized for his rockabilly sci-fi surf score for REPO MAN. Just as he played that punk’s attitude with a fiercely funny, energetic groove, Hufsteter is at home with a more subtle musical vein at the trendy NYC apartments and antiquated upstate mansion inhabited by those who give the KISS OF THE DAMNED, and a whole lot more carnal pleasures before going for the jugular. Among the many charms of Cassavetes’ film is that while these vampires might otherwise do their best to drink fake blood or guzzle on deer, they’re pretty much happy to be keeping odd hours as opposed to being immersed in the ennui of being immortal – all without any monster-busting Van Helsing wannabes to create more traditional jeopardy. It’s a slick comfort in their eternal skins, if still a lonely one, that Hufsteter captures with a hip Baroque sensibility for violin, harpsichord, electric guitar and classical piano. Female voices and a cobwebbed organ also convey a time-lost, old school horror sensibility. And in the end, this is still very much a horror movie, whose unearthly creepiness comes across through a reverbed, analogue keyboard sound that could just as easily be dropped into any 70s Euro vampire picture. But Hufsteter’s smart choices aren’t only limited to the genre, as his cooing salute to “’Round Midnight” proves. Such is the mesh of leather and corset cool that the score doesn’t so much make us hear trendoid vampires so much as it does Lou Reed on a bloody bender.

With vampires far more at home in smoke-filled NYC nightclubs than European castles, Cassavetes and music supervisor Dina Juntila add further hipness to her “Kiss” soundtrack with atmospheric, alt. rock choices that capture a Bauhaus groove, from HTRK’s throbbing “Ha” to the Krautrock of Der Fluch’s “Hexen Leben Langer.” Jane Weaver’s vocalese creates a hypnotic Velvet Underground vibe for “Parade of the Blood Red Sorrows,” while a progressive guitar spirituality fills Acanthu’s “Sleeping Beauty.” The tune’s haunted beauty is indicative of the spell that KISS OF THE DAMNED‘s soundtrack casts, creating memorable musical flesh and blood from what could have been an adept, if empty exercise in horror hepness.