Where the show picks up, is Joe Carroll alive, Ryan Hardy’s future and more 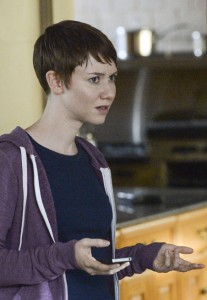 At the press event for THE FOLLOWING, cast and crew of the show gave the lowdown about what we will see when the show returns in January of 2014 for its second season during the annual San Diego Comic-Con 2013.

Shawn Ashmore, who plays Mike Weston, talked about what his character will be going through. “There’s a time jump. We pick up about a year after the events of the season 1 finale. Westin is still being affected by what happened in the first season. He lost two partners. Ryan and Mike basically tortured and executed a prisoner. So there are repercussions of those actions,” Ashmore says. “The good thing about Season 2 is we get to reset a little bit. We get to have some space and we aren’t at this continued pace. “

James Purefoy, who plays the evil Joe Carroll, gave a very playful answer about whether Carroll is alive at the start or Season 2 or if he was able to somehow escape the explosion that engulfed him in the season finale. “He’s going to be somewhere in the United States. He’s going to be learning from his mistakes. He’s going to be thinking maybe he was too selfish at the end of last season – thinking too much about his book and not about his family. And he’s going to learn to love the followers again.  You are aware of a body in that same building somewhere of a man of a similar build. You are very aware if there is one middle name for Joe Carroll it is ‘prepared.’ If there is one guy that thinks ahead it is Joe Carroll.”

How much Purefoy is playing and how much is fact remains unknown but he did say he will be shooting in the second season and he will be there at the start of shooting in August and he is growing a long beard for the show. “Am I alive? Possibly. Am I dead? Well, the show is full of flashbacks. The only thing to do is keep watching,” he says.

THE FOLLOWING creator Kevin Williamson gave some more solid answers to what will be happening in Season 2.

“Giving the spirit of the first season, all the twists and the turns, we are going to dive in the world. Where is Ryan Hardy? He is no longer with the FBI,” Williamsons says. “The Grand Jury has probed the events of last season because a lot of mistakes were made. The FBI didn’t behave as well as they could have. So, they have some explaining to do. Ryan Hardy survived that investigation and he is no longer in the FBI. It’s a year later and he is trying to rebuilt his life.”

The pacing of Season 2 will also be toned down.  “It was so dark last year. And so fast paced. Save Joe. Save Claire. Find Joe. Find Claire. Now Hardy has hope, he feels finally the death curse has been lifted. And when things start happening, he has something to fight for,” Williamson says.

As far as Joe Carroll goes, Williamson says “He’s dead … metaphorically. In the book he wrote in the final chapter he died and the hero killed him. But he had a little trick up his sleeve. But what of the body? He matched Joe’s DNA. So whose body was that? And how did he pull that off? How did he exchange dental records and DNA evidence? We answer those questions in the first few episodes.”

Williamson says they are sticking with the 15 episode format and that the show will continue to be a serialize show. “The difference is last year was more of an FBI chase. This year Ryan Hardy is no longer with the FBI so it is not an FBI show. He’s back to his life and the last thing he is going to do is cooperate with the FBI in any way, shape or form.”

We will also find out what Emma (Valorie Curry) has been up to and how she survived the events of the first season finale. “Since it has fast forwarded a year, we will get to flash back and see what happened,” Williamson says. “These flashbacks to what happened during the past year will flow throughout the season.”