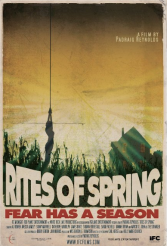 RITES OF SPRING is one of those horror movies where on the one hand, you have to give credit to the filmmakers – in this instance, writer/director Padraig Reynolds – for trying to spice up a formula with something a little different. Here we’ve got an annual blood sacrifice to appease a strange entity that may or may not be helping out with the local crops. At the same time, a quartet of not very adept criminals kidnap a rich man’s little girl. The two plotlines eventually converge.

While this sounds promising, the mixture of genres isn’t as productive as one would hope. The crime story gets invaded by a supernatural slasher flick, without having any noticeable impact on the latter once the two join up late in the day.

Other elements of RITES OF SPRING are problematic in ways that are both logical and logistical. If young women have been disappearing on the same date for the past quarter-century in what appears to be a pretty small town, why does no one seem at all concerned with this? What exactly is the creature going to do if it doesn’t get fed and gets out, as opposed to what it’s doing while it’s being sated? How did the creature’s acolyte (Marco St. John) wind up sacrificing to the monster in the first place? On the criminal side, why doesn’t it occur to most of the gang that something has gone seriously wrong when their leader (Sonny Marinelli) abruptly and for no good reason seriously ups the stakes on what they’re doing?

Ultimately, RITES OF SPRING is the kind of low-budget horror movie to watch if you feel the need and nothing more promising is available. It’s no worse than many others, but no better either.