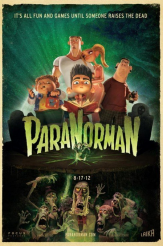 Sweet and likable, if a bit too intent on its message

PARANORMAN is the latest 3-D stop-motion animation release from a lot of the folks who brought you the film version of CORALINE (writer Neil Gaiman isn’t involved here, but a lot of the sensibility is the same). The movie is full of surprises, not the least of which is what those surprises actually are.

Written by Chris Butler and directed by Sam Fell & Butler, PARANORMAN deals with a little boy, Norman (voiced by Kodi Smit-McPhee), who can see, hear and interact with ghosts. Unlike the youngsters of, say, THE SHINING and THE SIXTH SENSE,Norman doesn’t find this a problem in itself, though dealing with the reaction of family members and schoolmates is a chore. ThenNorman is told that he’s inheriting the task of suppressing a curse laid on the town by a dying witch.

Without getting too spoilery, the first big surprise of PARANORMAN is that it isn’t about what one expects from the publicity – that is, an animated comedy about kids taking on a zombie infestation. There are zombies in the movies that Norman enjoys watching, and they are properly funny/cheesy, but there are no flesh-eating ghouls in the story itself, though there are ghosts and a murder. The latter, although discussed rather than depicted, makes PARANORMAN perhaps too serious for very small viewers. Despite the youthful characters and the playful tone, there are big grownup themes here of guilt, mob mentality and forgiveness.

Another unexpected aspect of PARANORMAN is its sweetness. It definitely has its goofy and rambunctious sides, along with some memorable gross-outs, but it also has a kind heart that runs through the proceedings, right up to the very end. Lots of characters, even ones who are initially off-putting or worse, turn out to have hidden humanity.

Although Butler’s screenplay is original, PARANORMAN bears a strong resemblance to a young adult or even a children’s novel in its structure, plot points and especially its messages. The points made by the film are all worthy and earned by what happens, but they tend to both stand out and slow things down, rather than being woven deftly into a bigger picture. This has the effect of making PARANORMAN seem warm and amusing, rather than friendly and hilarious. It’s a minor distinction, but it’s there.

The voice cast is terrific, with Smit-McPhee (of THE ROAD and LET ME IN) especially expressive as Norman and Anna Kendrick doing yeoman work as his exasperated teenaged sister.

PARANORMAN is a family film that will appeal to youngsters old enough to deal with genuine dramatic elements – a child doesn’t need to be old enough to watch DAWN OF THE DEAD to see this, but they should be at least able to cope with LITTLE WOMEN. As for adults, PARANORMAN is fun, but more a gentle tickle ghost story than a zombie spoof.