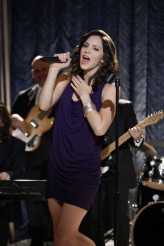 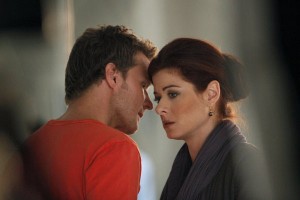 Oh, for crying out loud! If there was ever a storyline that would make me want to dump SMASH, the affair between lyricist/book writer Julia (Debra Messing) and actor Michael (Will Chase), now heating up in “Chemistry,” would make me do it. Because there isn’t any chemistry between Messing and Chase. Because it’s just too tiresome that the one married character has to have an affair. Because it’s just too creepy the way Michael keeps pressuring Julia into it.

The rest of the episode was kind of flat, too. Ivy (Megan Hilty) develops a voice problem – nothing serious, but because they are one week away from the workshop, Derek (Jack Davenport) pushes her into taking some steroids. Naturally, Ivy is getting paranoid about Karen (Katharine McPhee) being all too ready and able to step into her shoes, which is not helped when a gig singing at a bar mitzvah that Ivy was originally supposed to do gets passed down to Karen. Then Karen nails it in spite of never having been to a bar mitzvah, let alone having sung at one and gets asked to call some show biz hot shot.

In the meantime, Eileen is trying to drum up interest among investors while trying to find a place to live and that creepy Ellis (Jaime Cepero) seems to be busy spying on rehearsals and running to Eileen at the drop of the hat to tattle on Ivy’s voice problem, etc.

Then Ivy starts hallucinating which comes as no surprise since that is one of the side effects of Prednisone, which we have been reminded several times already, along with the fact that Ivy is hyper-sensitive to drugs. So Ivy calls in Tom (Christian Borle) to help her get through the night, then the next day, she blows up at Derek, letting everyone know what they knew already – that the two are sleeping together.

If anything, this episode demonstrates that it’s the singing and dancing that make this series – this had the fewest numbers in it, and it was by far the weakest.

Of course, the affair plot is not helping. We’re supposed to believe that Julia is telling Michael to go away even though she still wants him around, and either Messing isn’t pulling it off or it’s the writers’ misguided belief that there’s something romantic about the way Michael keeps pressuring her, even when she has made it clear that she wants to put her family first. That kind of pressure is not romantic. It’s not very believable, either. In real life, Julia should be getting a restraining order.

This is also one of the least interesting plotlines, too, because it’s also the most clichéd. It would be wonderful if writers figured out there are other conflicts possible between married couples besides cheating spouses. At the very least, it would be more interesting. And if we could just get back to singing and dancing there might be more to watch with SMASH.