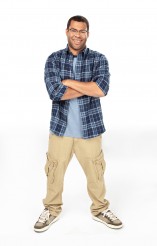 He also talks about CHILDRENS HOSPITAL, crossing the comedy line and Obama 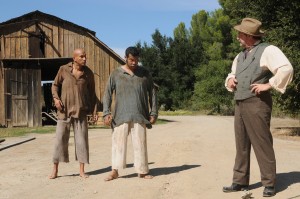 One of the funniest new sketch comedy series is KEY AND PEELE currently airing Tuesday nights on Comedy Central (and already picked up for a second season).

The show features former MADtv funnymen Jordan Peele and Keegan Michael Key as they tear through everything from pop culture, race relations and more in their own unique ground-breaking style.

ASSIGNMENT X recently spoke with Peele about the breakout new hit, his dead-on Barack Obama impersonation (he had to turn down an offer to take on that part on SATURDAY NIGHT LIVE years ago), and the status of his guest appearances on the hilarious Adult Swim series CHILDRENS HOSPITAL.

ASSIGNMENT X: Will you be making an appearance on CHILDREN’S HOSPITAL this next season?

JORDAN PEELE: The past couple of weeks they’ve been trying to get me in and I’ve been working on this show. The answer is “yes, I would love to.” They have asked me to do it, but I don’t know if it’s going to happen this season. It’s so crazy. It’s a funny show and they’re such nice guys. I grew up in New York City, I was born in 1979, so I was thirteen or fourteen when THE STATE came out. That rocked my world. IN LIVING COLOR and SNL as well. So to get to work with Ken Marino and Damon Wayans [on CHILDREN’S HOSPITAL] was great.

AX: So now you have your own sketch comedy show …

PEELE: This is the pinnacle. This is a dream come true. Who gets to do what we’re doing?

AX: What do you think makes a good sketch comedy show work?

PEELE: I think the main key is pushing the boundaries of what we know of sketch and if it’s reminiscent of a show that’s already out or has been out, it tends to fall flat. You have to find your own voice. Even when we started this, we had all the ingredients. We didn’t know necessarily what was setting us apart from other sketch shows. And as we developed more stuff, we found things like our [mixed race] backgrounds hadn’t been explored in sketch at all. The real answer is it has to feel fresh. They have to feel they’re watching something different or it’s not going to work.

AX: We’re in an incredibly P.C. world right now, so to do comedy that deals with racism, how far can you push it, without people going, “you’re crossing a line.”

PEELE: The main key, like Keegan [has said], you can’t pick on victims. People don’t want to see that, they want to see the bullies get taken out, especially the bullies who haven’t been taken out yet. My personal feeling is, if you don’t like the sketch, bring it. I try to defend everything when we’re actually making it to make sure I’m not ashamed of it and agree with the comedy. I feel if we don’t get that reaction, we’re not doing something right. 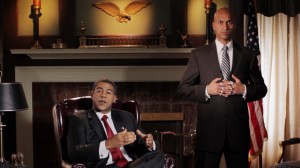 AX: What sketch do you think was right on that line?

PEELE: Certainly the auction block sketch. Keegan and I play slaves in an auction block. It starts off, “man, this is some bulls***. How are you going to own another man?” And as the scene goes on, the third person on the auction block keeps getting bought, so you see our self-consciousness about our physical appearance sort of take over the sketch. The setting, is, when you see the imagery, you know it’s an edgy scene and not something we’ve seen before and know that there’s a very good chance people will get turned off immediately. We hope they stick in there and go “this is not the take I was expecting. This is funnier, smart, more revealing and coming from a place of human honesty.”

AX: So you originally auditioned for SATURDAY NIGHT LIVE for Obama?

PEELE: I had some good friends over there, and a great meeting with [executive producer] Lorne [Michaels] and they asked me to do it, but I couldn’t go for contractual reasons. I was on MADtv. It was an interesting time. It was during the strike and it was a nebulous period about whether MADtv was going to be coming back and if we were going to be coming back for that season. It was a whole fiasco. It was such a shame, SNL is one of my favorite shows of all time.

AX: At least you get to finally do you Obama on KEY AND PEELE.

PEELE: I was inconsolable for a couple of years and this happened. Everything happens for a reason, now we have our own show and couldn’t be happier.