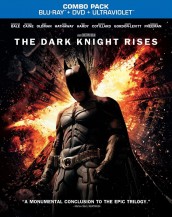 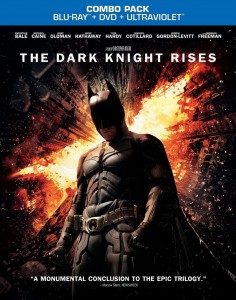 THE DARK KNIGHT RISES – I am one of those people that like to believe the Batman movies started with BATMAN BEGINS and only three movies exist that feature the Dark Knight. I can’t stand the one with George Clooney or even Val Kilmer. Only Michael Keaton’s version seems somewhat close to the actual character that was born in the comics. But call me a Christopher Nolan fanboy or no (I love INCEPTION too), I could care less but THE DARK KNIGHT RISES is a great movie. Not only does it wrap up the other two movies nicely and tie them together, but it gives us a greater sense of danger and tension that the other films didn’t have. Yes, I agree, some of the plotline involving Bane’s (Tom Hardy) attempt to take over Gotham, force it to give back to the man and then ultimately nuke it back to the stone age, are a bit over-the-top and don’t make a lot of sense.

But if you look past this, the film itself is just awesome with a classic hero in Batman (Christian Bale) rising from the ashes to defend his city he calls home (even if those same people think he killed a guy in cold blood from the previous film). Add to this a simply awesome soundtrack from Hans Zimmer, a pretty cool badass badguy, a sensuous female partner in Catwoman (Anne Hathaway) and a nice little twist at the end and it works really well. Plus, I love the symbolism that carries the movie throughout from the fire rising from Bane to Batman rising to save it. Good stuff and I can’t recommend this film enough. Get the three disc Blu-ray version with the digital copy, DVD and BD all in one so you can watch it virtually anywhere.

V/H/S – This horror movie got a lot of attention for the unique nature of how the nastiness was delivered. A group of thieves/thugs break into an old man’s house in order to steal a single VHS tape and get paid. A simple enough job. But things get freaky when they start watching the tapes laying all throughout the house that reveal a secret world filled with nasty creatures with a taste for blood, digital serial killers, haunted houses, alien babies and much more. While this horror anthology has a lot of good, tense and crazy ass moments that will have you jumping in some points, you must endure an entire film with shaky cams, which can be troubling for some viewers. But if you can endure, you will be well rewarded with some great nudity, gallons of blood, ripped off penises, brutal boyfriends, a really pissed off poltergeist and much more. 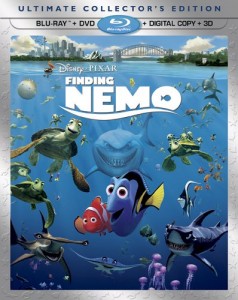 FINDING NEMO – I’ve said it before recently that Disney is really rolling out their catalog nicely in terms of converting to high definition and giving fans of the films a little something more. While Disney has released NEMO again for DVD and Blu-ray it has also given a 3-D version. Pixar has done it again this time creating an undersea world that is vivid, alive and amazing but not without dangers. When a young clownfish is captured by scuba divers, his father Marlin (Albert Brooks) sets off to rescue him meeting a variety of sea creatures along the way. I suggest getting the five disc ultimate edition that contains the 3-D Blu-ray, Blu-ray, DVD, digital copy and special features. If you had kids who loved it when it came out or have new children that can enjoy it, it is a great, fun story for all. 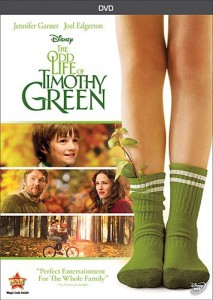 THE ODD LIFE OF TIMOTHY GREEN – A little kid with green leafs on his ankles drops into your house and what do you do? Call the cops? Hit him with a broom? Not these people (Jennifer Garner and Joel Edgerton) who take the little tyke in and try to be better people because of it. However, any real growth is not a matter of personal development but rather just being in the presence of this supernatural kid, who also helps other people in the town “learn” to be better people. While the movie looks great and the actors are charming and nice, it just is another life lesson schlock with a supernatural twist. 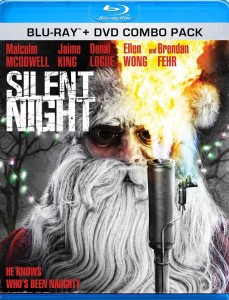 SILENT NIGHT – Santa’s coming to town and Santa’s really pissed off. The remake of the original SILENT NIGHT, DEADLY NIGHT isn’t nearly as offensive but it doesn’t try to be. Someone is killing the naughty adults of a sleepy, small town with a seedy underbelly. From the local porn producer, to the little brat down the street, to an adulterous sheriff’s deputy, to a nasty Santa, to a lecherous priest all fall victim to jolly ole nick in really some nasty and sometimes creative ways. Nothing is reinvented here and it isn’t even a shell of the same film as the original but for a Christmas no-brain slasher it works. 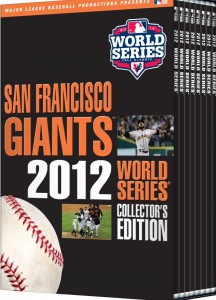 THE SAN FRANCISCO GIANTS 2012 WORLD SERIES COLLECTOR’S EDITION – Wow, talk about a cool item especially just in time for the holidays for all those Giants fans out there. Offered up in Blu-ray (as well as DVD) this 8-disc collection captures all four games from the most recent World Series and the Giants domination over the Detroit Tigers. All games are the full games complete and you can watch them over and over again for posterity. Also included is the final game against the Cincinnati Reds, where the Giants overcame a deficit to win the first round and Barry Zito’s series-changing win against St. Louis that also was the catalyst for the team to come from behind in the second round to win. But there’s more as the set also features Matt Cain’s perfect game that happened this season. Pretty much all the things you want in a full box set if you are a Giants fan and probably an awesome gift. 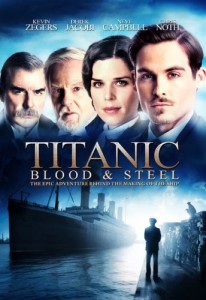 TITANIC: BLOOD AND STEEL – Given the popularity and fascination with the Titanic (and do I need to even mention James Cameron’s billion dollar movie?), it totally makes sense to create a miniseries detailing the building of the doomed vessel and obviously the run up to the great sinking of the ship deemed unsinkable. The 12-part series is filled with more than just building a ship as obviously that wouldn’t really hold much attention. Instead it is a similar story to the classes on board the ship with the wealthy, middle and working class all playing a role in constructing and investing in the ship. Among the themes include the Irish fighting the British for control of their country and what the ship actually meant to the people of the land in terms of hope and unity. If you are a fan of the movie or the history, this is a must have or must watch. 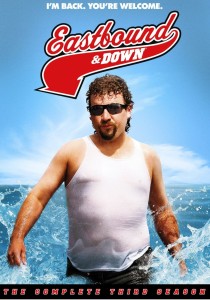 EASTBOUND & DOWN: THE COMPLETE THIRD SEASON – Kenny Powers (Danny McBride) returns for another season of HBO’s hilarious comedy about a former major-league pitcher that is clueless and crazy. This time he revives his baseball career as a closer for a minor league team in Myrtle Beach, SC where he becomes the king of the town, well sort of, as usual he must come to terms with his personal life and his lack of professional dealings. Obviously fans will know what to expect from this funny series if they haven’t already seen the episodes.