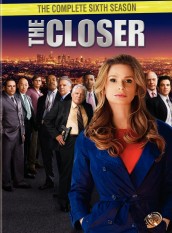 At today’s TCA press tour for the Turner networks, details on the new THE CLOSER spin-off for TNT was announced.

The series will be called MAJOR CRIMES and will pick up directly where THE CLOSER leaves off.

“THE CLOSER concentrated solely on getting a confessions, this is about getting convictions,” says Michael Wright, executive vice president, head of programming for TNT, TBS and Turner Classic Movies (TCM)

“The day we found out Kyra [Sedgwick] was not going to go forward [with THE CLOSER] after her contract was complete … [Michael Wright said] ‘okay, I want to offer you guys a 10 show commitment to bring these characters forward to keep them going,” says executive producer Michael M. Robin. “We all thought about it, and in ten seconds – ‘we want to continue with these characters.’ We love these characters, TNT loves these character and now we can create a spin-off vehicle to keep them moving forward.”

As for how the show will be different, some character will be promoted and others will get a chance to expand their roles beyond their duties on THE CLOSER.

“THE CLOSER was a seven year examination of the justice system and we used a single character to refract all the different points of view,” says executive producer James Duff. “She acted as a prism. It was a single lead show, with a really good ensemble  view of the show and she was interested in the confession and that’s all she was interested in. That’s where her job ended. The big difference here, we’re looking at the justice system differently. It’s more of a group view and less of an agreement about what it means.”

MAJOR CRIMES will air this summer, one week after the finale of THE CLOSER airs.