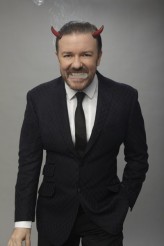 After hosting the Golden Globe Awards twice, Ricky Gervais is returning for a third time this Sunday night for THE 69th ANNUAL GOLDEN GLOBES.

While promoting his new HBO faux docu-comedy series LIFE’S TOO SHORT (debuting February 19 on HBO), he spoke about why he decided to return – even though many felt he took his comedy way over the edge during last year’s telecast.

“I’m going to have another go,” says Gervais. “I did it the first time because I thought that’s fun and it’s fun for a comedian to have a global audience like that. And I did it on the proviso that I do all my own material. They don’t know what I’m going to do and they kept to that. And then I did it a second time, because I thought I could improve on the first, and I think I did that. And I wasn’t going to do it a third time, but then I kept reading posts and press saying ‘he’ll never be invited back.’ So I did it to annoy them. What’s the worst that can happen, you know? I end my career once a week, if you read the press. I only do things that could end my career now. That’s the fun. That’s my extreme sport.”

Gervais then adds, “I don’t care what people think.”

In terms of what to expect from his Globes performance this year, Gervais gives a sneak peak.

“I’m going to do a monologue about the year and then introduce six or seven people throughout the show like I did last year,” says Gervais. “I’ve got nothing against any of those people in the room. I’ve worked with many of them. I like many of them. I admire most of them. It’s like they’re just gags. I’m not trying to, you know, hurt anyone’s feeling or give them a bad night or undermine the moral fabric of America. I’m a comedian.  I’d rather they laughed than gasped, but I cherish the gasps along with the laughs. I think everyone took it well. I don’t know who was really outraged last year, because everyone I spoke to who made a joke about was cool with it. I think outrage breeds if someone says ‘I’m outraged'”