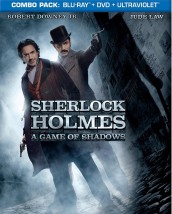 Also worth checking out: GHOST RIDER: SPIRIT OF VENGEANCE, MONSTER BRAWL, ENTOURAGE: THE COMPLETE EIGHTH AND FINAL SEASON, SPIDER-MAN, DOCTOR WHO and more 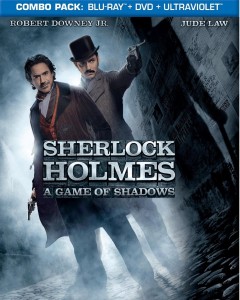 SHERLOCK HOLMES: A GAME OF SHADOWS – I wasn’t a big fan of the first SHERLOCK HOLMES movie as I never really got behind the legendary detective as an action hero versus, you know, doing actual investigative work. So when the sequel came out I wasn’t expecting a lot. Maybe that’s why I thought A GAME OF SHADOWS was actually quite entertaining. Maybe it also helped that since I already knew what I was getting into – an action oriented HOLMES film – that my hopes of pure investigation work and searching for a killer weren’t in place.

Once again, Robert Downey Jr. and Jude Law reprise their roles as Holmes and his partner Mr. Watson but this time with Holmes’ arch nemesis in tow in the form of Professor Moriarty in pure evil form. Moriarty devises a cunning plan all seemingly unrelated but connected in order to bring the dastardly character untold riches and notoriety. Of course, Holmes was again is more fisticuffs rather than searching for clues but again we all know what we are in for here, so it ends up being a fun romp. 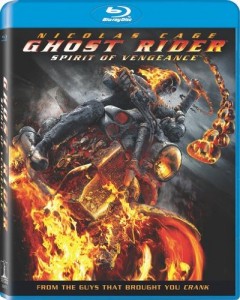 GHOST RIDER: SPIRIT OF VENGEANCE – Unfortunately, the same can’t be said for this sequel once again featuring Nicolas Cage as the devouring of souls flaming skeleton motorcycle rider. Whereas the first film served as an introduction to the character – albeit one far from the comic book version – this seems to ignore much of what came before it and instead has him chasing a boy that is the son of the devil. Well the devil wants him back and sends a group of lackeys to do it. The Ghost Rider dispatches them quite easy but things get heated when the devil turns one of them into Blackout, a demon with the power to erode anything it touches. The problem with the film is that it is very disjointed. Lots of silly dialog, Cage doing his obligatory crazy antics and some really bad CGI. The CGI of the actual Ghost Rider is pretty cool but everything else from cars flipping over to fake bodies being torched is laughably bad. Yes, it is a darker film than the first (which is more in-tune with the comics that are heavily dark with Johnny Blaze always looking to be free of his curse of the Rider) but that isn’t necessarily better in this case. 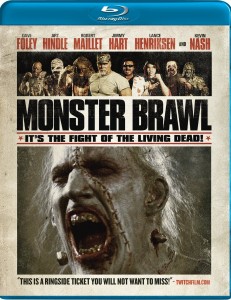 MONSTER BRAWL – This is a combination of comedy-horror and wrestling pitting some legendary (and many not legendary) creatures against one another for the hell of it. It runs the gambit of including the Werewolf, Mummy and Frankenstein along with odd choices such as Swamp Gut and Cyclops. And instead of including Dracula or any of the other classic vampire choices, a nameless Lady Vampire is one of the contestants. There is also Witch Bitch and Zombie-Man. Still, regardless of who they included in the matches (which may have had more to do with licensing than anything) it is actually pretty good mindless fun especially if you are a fan of wrestling – as many wrestlers are cast as the monsters or managers including Jimmy Hart, Kevin Nash, Robert Maillet and more. The addition of Lance Henriksen as the voice of God detailing the origins and matches is a nice touch as well. Entertaining but leave your brain at the door. 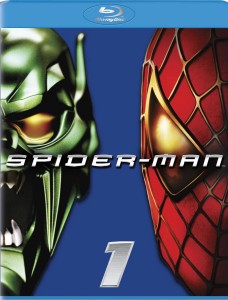 SPIDER-MAN 1-3 – With the release and reboot of the SPIDER-MAN franchise coming soon to theaters (in THE AMAZING SPIDER-MAN), it makes sense for Sony to re-release the first three films from Sam Raimi back onto Blu-ray, all remastered with the latest technology and looking better than ever. The other cool thing they have done to get you to re-invest in the franchise is that they have included a digital copy (on Ultraviolet) as well. Any fan of these films probably realizes that the second movie is the best of the bunch, as we don’t have any of the origin to tell but all action, and that the third is the weakest. The first is still a fun romp and the reboot has a lot to live up to. 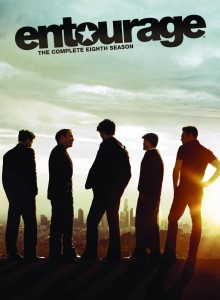 ENTOURAGE: THE COMPLETE EIGHTH AND FINAL SEASON – The final season of the show was truncated into eight episodes as maybe they just ran out of ideas or maybe they just didn’t get the backing of HBO. But regardless, the first seven are true to the rest of the series – characters have changed, some for the better, some for the worse; Jeremy Piven is priceless as always and the best part of the show; major plot points are wrapped up; Vince starts a new path now sober and looking to help his friends rather than just bring them along for the ride. The final episode, however, as it seemed rushed and just a mess as they tried to wrap everything into a neat bow and instead just made a mess of it. Still, for fans, it is probably a welcome addition to their collection.

SARAH JANE ADVENTURES: THE COMPLETE FIFTH SEASON – It is a heavy heart that this comes out after not too long ago Elisabeth Sladen died. But it is a fitting tribute that at least the BBC aired the final season of the show and is offering it on DVD in order for others to watch. While not nearly as enjoyable as Russell T. Davies other creations in TORCHWOOD and the revival of DOCTOR WHO, it still has that same feeling as the other shows that are all centered in the same universe with the same foes and engaging characters. The only thing that is missing is the “My Sarah Jane” special that aired after Sladen’s death that would have been a nice touch to this collection. 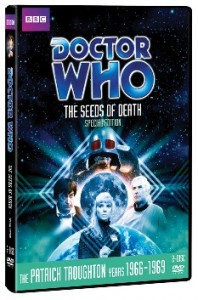 DOCTOR WHO: THE SEEDS OF DEATH – As we near the end of the product roll out of the classic WHO catalog, the episodes that are not getting the special edition re-release are perhaps not the best of the bunch. THE SEEDS OF DEATH is a Patrick Troughton (the second Doctor) episode where mankind in the future has once again become dependent on something. Here, it is a system the moves people, food and medicine globally. When that system breaks down, the Doctor must find out why and put a stop to it before the human race becomes extinct (again). The episode has been remastered from the original source material and includes a nice host of features including one of the Ice Warriors, an audio commentary and much more. 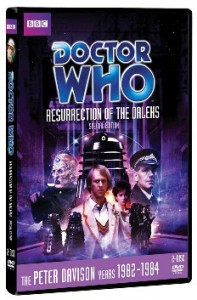 DOCTOR WHO RESURRECTION OF THE DALEKS | (c) 2012 BBC Warner

DOCTOR WHO: RESURRECTION OF THE DALEKS – The Daleks want to be free of the control of Davros, their leader, and have imprisoned him. The problem is that the Daleks need him as another race has created a virus that destroys the robots and the need Davros to create a cure. But there is more going on here including the Daleks creating human android doppelgangers in order for them to take key positions in the government as well as creating a Doctor doppelganger to kill the Gallifreyan High Council. This is a re-release of the DVD as a special edition that has been remastered using the latest technology and includes new extras that weren’t included on the original release as well as the legacy special features.

DROP DEAD DIVA: THE COMPLETE THIRD SEASON – The Lifetime series that had a wannabe model reincarnated into the body of an overweight attorney returns to DVD for the third time with a slew of new courtroom cases to take on including a breast implant surgery gone wrong and a death row inmate looking for salvation as well as the slew of own issues with having to deal with being reincarnated and such.