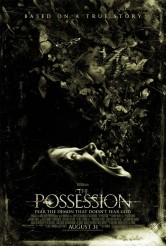 As movies about demonic possession/exorcism go, THE POSSESSION is pretty good. It has strong leads in Jeffrey Dean Morgan and Kyra Sedgwick, a persuasive child actress in Natasha Calis, characters who generally don’t do anything illogical in the screenplay by Juliet Snowden & Stiles White and a pretty deft touch by director Ole Bornedal, who knows how to make things creepy without pushing them into absurdity. A nice variation on the theme is using Jewish rather than Catholic mythology as both the menace and its potential antidote. Yes, there are moments of silliness and yes, there is the business of having only one non-white character in the whole movie, who is also one of the few fatalities (Really, folks? In 2012, you’re still doing this?), but overall, it works.

A prologue shows us the unfortunate occurrence when an elderly woman attempts to destroy an old wooden box in her possession. We are then introduced to upstate New York high school basketball coach Clyde (Jeffrey Dean Morgan) and Stephanie (Kyra Sedgwick), who have been officially divorced for three months now, with joint custody. Older daughter Hannah (Madison Davenport) is resigned to the split, but younger daughter Em (Natasha Calis) still hopes Mom and Dad will get back together, even though Mom already has a new boyfriend, dentist Brett (Grant Show).

Obliging his girls on an outing, Clyde stops at a yard sale and Em announces she wants the interesting-looking old wooden box.Clyde thinks nothing of it and buys the object, along with some actually innocuous things. A few weird events happen at Clyde’s new house – something makes a mess in the kitchen, large moths turn up in unexpected places – but it’s not until Em herself starts acting strangely that Clyde gets worried, with good cause.

People who’ve just seen THE APPARITION (released last week) may experience a bit of déjà vu or even confusion as far as Clyde’s isolated home goes – horror films are evidently just now catching on to the inherent scariness of new housing tracts, a factor in both movies. It works well, as does Matisyahu in the role of Tzadok, the Hasidic rabbi’s son who eventually attempts the exorcism. He’s very serious in what he’s doing, yet has a twinkle that keeps him, and the ritual, from tipping over into pretentiousness.

The filmmakers generally know what they’re about in Em’s gradual disintegration, never having something go on for so long that it crosses the border from spooky to camp and never having adults shrug off something that is seriously troubling. Stephanie is particularly well-handled – when she has onlyClyde’s word to go on, she is naturally disbelieving, but when she observes Em herself, she does what any parent – and more to the point, what anyone in the audience – would do.

THE POSSESSION is touted on being “based on a true story.” Since the basis could be something like someone once bought a strange box at a garage sale, this claim perhaps doesn’t bear too much emphasis, but for the most part, we’re carried along with the momentum and plot twists.

There’s also the novelty of using Judaism as the supernatural backbone of the story (it’s been done before, but not often). Bornedal even arranges for something that looks simultaneously like the work of Marc Chagall and a very menacing spirit to show up organically in an especially effective flourish.

THE POSSESSION is unlikely to unseat THE EXORCIST in the pantheon of this horror subject, but it nonetheless works.