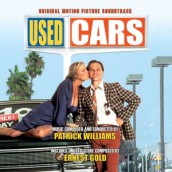 Get two composers for the price of one fun lemon

It’s a movie that’s anything but a lemon, even if the picture got treated like an Edsel upon its initial release. But with the director-writer team of Robert Zemeckis and Ed Gale (I WANNA HOLD YOUR HAND) in the drivers’ seats, USED CARS has endured as a cult comedy classic, one whose case of musical buyers’ remorse is now revealed in a limo-quality La La Land release that not only offers Patrick Williams’ funkily energetic score, but its first, puttering (if well-intended) ignition by Ernest Gold.

The idea of getting the composer behind the greatest cinematic demolition derby of all time with IT’S A MAD MAD MAD MAD WORLD seemed like a no-brainer at first for Zemeckis and Gale, even if they wanted a far more “serious” sound. However, Gold gave them “a great score for the wrong movie,” as Gale explained. While Gold’s collection of national anthems, disco numbers and a Mexican guitar would make it into the film as source, one can immediately tell that his rapturous, TEN COMMANDMENTS-like tone for a comically desperate race to the finish line wasn’t the way to go, though it certainly ranks as one of Gold’s best pieces when divorced from the picture.

With much of his score carrying the kind of weight where it seemed bodily injury would actually befall someone, Gold’s otherwise fine music stepped over a fine line from playing comedy “seriously,” and weighing the movie down, one that Elmer Bernstein so dexterously walked with his brassily portentous orchestral sound with stuff like AIRPLANE. However, that’s not the case with every Gold cue, some of which play with the rollicking pace of a silent movie chase to The Big W, and at others. like some old-time jazzy vaudeville routine or operetta. Even if this didn’t work for the movie at hand, it’s certainly a pleasure to have Ernest Gold’s own, epically cartoonish sensibilities available here for the first time.

Coming to the rescue to firmly add up that mile of cars was Patrick Williams. A master of both pop underscore and arrangements for the likes of Barbara Streisand, Mary Tyler Moore and Peter Falk, Williams made a fast deal that Zemeckis and Gale couldn’t refuse with a fun, down n’ dirty country funk / disco sound that captured “Cars’” Arizona desert setting and its huckstering desert rats, as heard through a warped sense of patriotic American consumerism in its patriotic marching band theme. Ingeniously giving mirror-ball rhythm to “Hail to the Chief” as a Presidential address is commercially hijacked, as well as playful bump and grind to David Rose’s famed stripper melody, Williams’ score has a delicious, then-contemporary sleazy keyboard and wah-wah energy to it, with the orchestra really coming into play for the final car-cattle drive.

Capturing the rambunctious energy that Gold didn’t get, Williams’ makes the spectacle sound like Alfred Newman’s HOW THE WEST WAS WON as crossed with BEN-HUR‘s trumpeting chariot race, it’s theme that revs through the film’s breathtakingly hilarious stunt set pieces, while telling us that it’s all good, hazard-free fun. More than just slapping a fresh coat of musical paint onto this baby, Patrick Williams’ score is a fun re-build, taking up many of Gold’s thematic ideas without ever listening to where they went “wrong” in the first place. Extra air gets put in CARS album with Bobby Bland’s roadhouse-style theme song that should have been a top 40 contender, along with Randall L. Larson’s appreciative notes and eye-catching album design by Mark Banning, who had the distinction of actually driving in the car fleet that comes to the rescue.

Click on Link: To Purchase the USED CARS soundtrack