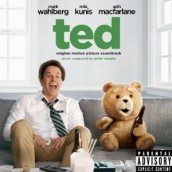 Nothing represents cuddly innocence like a child’s teddy bear, an image that brings to ear the honeyed sounds of orchestral happiness. And playing just that is the key to what might be the most brilliantly subversive talking “animal” score of all time, given the beautifully lush stylings of Seth MacFarlane’s pet composer Walter Murphy. In TED, he makes his master’s crude humor all the more hilarious, and emotionally affecting, as if this music was actually accompanying the real, non pot-smoking, slut-screwing deal.

As a vet TV composer with such credits as WISEGUY, BUFFY and PROFIT, Murphy’s most prolific, and popular work on the boob tube has been his Emmy-winning collaboration on such seditious MacFarlane toons as FAMILY GUY, AMERICAN DAD and THE CLEVELAND SHOW, an opportunity that allowed Murphy to dive into a diverse array of scoring styles, any number of which pay off handsomely here for MacFarlane’s live action directing debut. And he’s certainly got a great theme that’s derived from the Oscar-worthy title track “Everybody Needs A Best Friend,” whose jazzier stylings capture a swinging 60’s cocktail hour vibe worthy of Neil Hefti. Sparkling, tender strings capture all of the cuddly warmth, and humorous hijinks of this Teddy Bear, thankfully minus the kind of goofy orchestral pratfalls that often accompany this type of music when it’s played as kid stuff.

As TED goes beyond its brilliant sex and drugs jokes to actually inject some jeopardy, Murphy effortlessly segues into John Williams land with bright and big suspenseful chases, with even a nod to the maestro’s Indy hat save to complement “Ted”’s geek street cred. But perhaps the best compliment to Murphy’s breakout movie score is that the thrills, and real magical emotion he provides for the climax makes you forget you’re hearing music for a stuffed animal at all, but instead a pugnacious human being you care about, a wisenheimer with a heart of melodic gold.

While Ted’s true foul-mouthed nature was no surprise, the insane amount of deep-geek references in the film certainly is, especially as to how the whole movie ends up being a love letter to 1980’s FLASH GORDON. That of course means the Queen song’s second comedy album highlight after “Blades of Glory.” And the kitsch tunes keep coming, from Rita Coolidge’s OCTOPUSSY theme “All Time High” (made even more memorable by Mark Wahlberg’s wonderfully terrible performance- unfortunately not included here), Tiffany’s “I Think We’re Alone Now” and “Hootie & The Blowfish’s equally overused “Only Wanna Be With You.” Norah Jones is also on hand for the acoustically soulful love song “Come Away With Me,” though it’s her big band rendition of “Everybody Needs A Friend” that I’d love to deservedly see on the Oscars- though I somehow think the F bomb-filled “Thunder Buddies” is a little too on the felt-nose for the Academy.