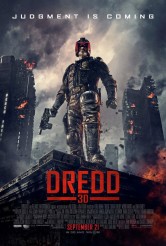 A decent dystopian cops-vs.-gangs adventure, with a look true to its comics roots

Apart from shared comic book origins, DREDD 3D has nothing to do with the 1995 Sylvester Stallone starrer JUDGE DREDD (or the 1997 and 2003 iterations). This is a good thing, as the new version has a sense of internal coherence that helps us take it seriously on its own terms. Director Pete Travis makes good use of 3D and slow motion to create the look of comic book frames, true to the material’s source (created by John Wagner and Carlos Esquerra).

Writer Alex Garland has set up a storyline that is pretty straightforward. In the future, Mega City One spans the areas that used to encompass everything from Boston toWashington, D.C., with gigantic tower block buildings that are effectively their own cities. The only law in this new land comes from the Judges, who also function as police, juries and executioners.

On what starts out like any other day, Judge Dredd (Karl Urban) is asked to take along Anderson (Olivia Thirlby) out for an evaluation.Anderson has flunked her judge exams, but she’s psychic, so the higher-ups would like her to make the cut. Dredd lets Anderson choose which call they’ll take, and Anderson picks one that takes them into a two-hundred-story-high building that’s a city under itself, under the control of a brutal drug gang led by Ma-Ma (Lena Headey). Ma-Ma is currently peddling an illegal substance called Slo-Mo, which makes users experience things in … well, the name pretty much sums it up.

Although it’s unlikely either production saw the other’s script, DREDD 3D resembles a much more high-tech, fanciful take on THE RAID: REDEMPTION, with a very small band of law enforcement trapped in a tower building by a gang and terrified apartment dwellers. The spectacle here is on a much bigger scale, but the sense of claustrophobia and vertical chess-playing is much the same.

Director Travis has a lot of fun depicting the effects of Slo-Mo, which allows the filmmaker to create still frames that have the proportions and even coloration of comic book artwork. The 3D, while not strictly necessary, is a nice accessory here, allowing further use of this aesthetic as droplets of broken glass and the like shimmer in the air seemingly between the screen and our faces.

Speaking of faces, while it may be true to Dredd’s origins, having Urban’s entire visage above his mouth covered for the whole film makes for a less than dynamic hero. At least with Batman, we got to see his eyes (and he took off the cowl once in awhile); Dredd’s helmet hides almost everything. It adds more pretension than mystery, though from a strictly practical angle, it does seem like effective protective gear. Urban growls effectively and Dredd’s physical feats, whether performed by the actor or a stunt double, all make him seem tough and fierce.

Thirlby has a good watchful quality that becomes Anderson well, and she seems fluid enough to be someone who might make it as one of the heavily-armed judges, particularly since her character has the advantage of psychic perception. Headey, so wonderful as Queen Cersei in GAME OF THRONES, displays that she is equally at home playing a feral villainess.

DREDD 3D is, at its roots, the story of a tough law enforcement training day. It has just enough ambition to make a few modest statements about the nature of power and judgment without sounding pompous and its action is done well. It probably won’t blow your mind, but it will uphold your faith that comic books make good source material.