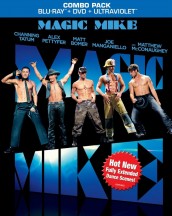 MAGIC MIKE Highlights this week in Blu-ray and DVD Releases

Also worth checking out: ABRAHAM LINCOLN: VAMPIRE HUNTER, SECRET OF THE WINGS, SEEKING A FRIEND FOR THE END OF THE WORLD, HAPPY ENDINGS: THE COMPLETE SECOND SEASON and more 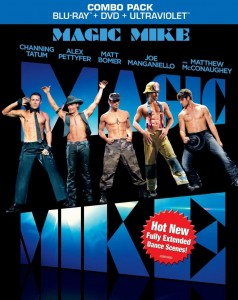 MAGIC MIKE – “It’s raining men! Hallelujah” Let’s just get this out of the way right from the start. MAGIC MIKE won’t be for everyone. If you followed any of the coverage of the release of this movie into theaters then you know that it involves lots of musical numbers, lots of dancing and lots of well-chiseled men showing off the many hours they spent in the gym. My wife loved it. But there is much more to MAGIC MIKE then a bunch of dudes stripping to various popular musical numbers. OK, that’s a lie, really it is about stripping and musical numbers. Channing Tatum stars as Mike Lane a day laborer that works construction doing any types of jobs he can to make money. But at night, he’s Magic Mike and is the top draw at Xquisite, nude dancing for women. He befriends a young chum and gets him to work in the club but finds out the dude has loads of issues with drugs so that becomes part of the “learning” part of the storyline.

So Academy Award material it is not. But if you are someone that fancies the mancandy, this is definitely worth seeing as it also has Matthew McConaughey, Cody Horn, Joe Manganiello, Kevin Nash and many more. Like I said, not probably a film for everyone, but my wife loved it and that’s probably the target demo, not someone like me that spends most of his free time watching gory horror films. The Blu-ray version includes extended dance scenes, a feature where you can just watch the dance scenes and not the plot and a featurette on the actors and the art of being a male stripper. 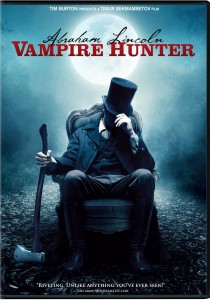 ABRAHAM LINCOLN: VAMPIRE HUNTER – Adaptations from comics are as hot as ever and even if they may not perform well at the box office, doesn’t mean that they are a complete failure. Critically panned and seen by very few in theaters, ABRAHAM LINCOLN: VAMPIRE HUNTER may have turned off the historical crowd that didn’t want to see the film portray “honest Abe” as anything other than what they believe him to be. However, if only they knew it doesn’t make Abe seem like any worse of a man and, in fact, just confirms just how much of a badass Lincoln was. Of course, it is fiction (or is it?) about a young Lincoln whose mother died not of natural causes but from a vampire. Abe then sets off to kill the vamp, getting trained along the way but another hunter and taking out a number of creatures of the night masquerading as shopkeepers. Along the way, Lincoln gets caught up in the slave issue going on and seeks political office. Fast forward to his time in office, Lincoln once again must call upon his skills as a vamp hunter in order to save our great nation. Ludicrous, yes. Entertaining, also yes. Lots of nice CG that makes it more enjoyable in Blu-ray and some hot and heavy action sequences so if you enjoy those types of movies, check it out. 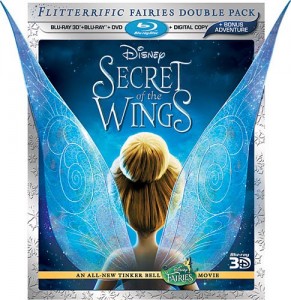 SECRET OF THE WINGS – Disney has been rolling out the 3-D films into theater and on video more so than any other distribution company. While 3-D is still a niche, Disney seems to be unwavering in its commitment to providing titles with the feature included (of course, at a price). Obviously, this will make the early adopters of 3-D extremely happy. SECRET OF THE WINGS is the latest direct-to-video Tinkerbell movie, about the third modern title featuring the fairy in the last few years. Here, Tink discovers a way to cross over into the winter fairy land to discover not only are her wings more sparkly, a sister she never knew lives there. It is a cute film that is visually stunning and has something in there for everyone – from toddlers, to preschoolers, to grade school and even adults. A family film indeed. Strange though given the high production values that it was taken to theaters but Tinkerbell seems to be carving out a nice niche on direct-to-video so why fix what isn’t broken? Like I said this is offered in 3-D Blu-ray but is also available in just standard DVD and Blu-ray as well and can be enjoyed in any format, although Blu-ray really shows off how great the animation is. 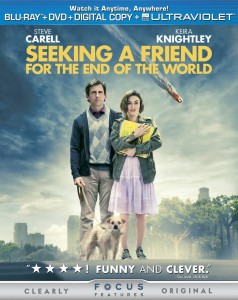 SEEKING A FRIEND FOR THE END OF THE WORLD – What would you do if you knew the Earth was going to be destroyed in a scant few days by an asteroid? Would you spend time with your family and friends? Would loot and pillage? Would you run off on your partner in order to do something else with the few moments you had left? When Dodge’s (Steve Carrell) wife runs out on him after hearing the news the Earth was going to die, he and his neighbor Penny (Keira Knightley) go on a road trip in order to find the meaning of life. Goofy at times but taken rather seriously as well, it is an interesting RomCom as the two realize that finding each other may have been what they needed all along (naturally). Far less pretentious then MELANCHOLIA (that also dealt with similar topics), this is actually something that anyone can enjoy rather than be dulled by trying to be too arty. 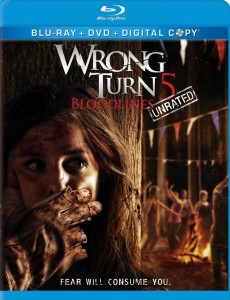 WRONG TURN 5: BLOODLINES – The WRONG TURN franchise went from having a traditional horror theme element – bad cannibalistic hillbillies prey upon unsuspecting people that wander into their territory – and has moved into the “let’s just kill people in extreme ways because we can” horror variety. Not that there is anything wrong with that. In fact, I can dig this type of horror movie because it doesn’t pretend to be anything other than this. It won’t dazzle you with fancy plot details. It won’t amaze you with awesome acting. But blood, gore, boobs, body parts flying everywhere and no hope for anyone involved – it has it in spades. And there are some brutal, nasty, gory deaths in this one. Gore hounds will be in heaven. 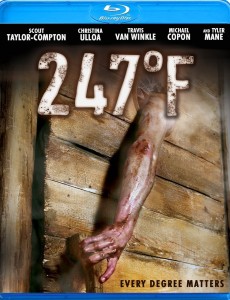 247 DEGREES – Sometimes a horror movie doesn’t need a big bad serial killer in a mask to be scary and gory. Look at Adam Green’s FROZEN, taking place entirely on a ski lift with a pack of wolves as the antagonist. The antagonist in 247 DEGREES is a sauna. Yep, that’s right. Three people get locked in a sauna with no help coming and have to figure out a way to not only stop the built-in heater from cooking them but a way out of the door that’s blocked. Unfortunately, unlike FROZEN, it is entirely not suspenseful and Scout Taylor-Compton, who did a serviceable job in Rob Zombie’s HALLOWEEN, is completely annoying as the whiny widow that has issues in the past that are completely unrelated to anything happening here and serve to only be filler for a mediocre horror flick. 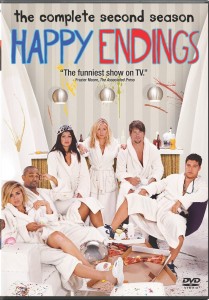 HAPPY ENDINGS: THE COMPLETE SECOND SEASON – Returning for the third season very soon, HAPPY ENDINGS has found itself as one of the strongest sitcoms on TV today. The premise is that Dave (Zachary Knighton) and uber hot Alex (Elisha Cuthbert) were a happy couple that split. But having the same friends, how do they share? They don’t and the friends instead of choosing sides, still interact with each member of the couple. And with kooky friends like these, it ends up being some very funny scenarios. Each character is full of quirks and interesting qualities that they alone are sometimes much better than watching the former couple manage their new lives. With bad comedies such as TWO AND HALF MEN going strong, it is nice that an actually funny show is getting some love. Check it out.