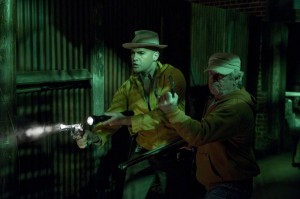 What do we associate most closely with March 17, known for centuries as St. Patrick’s Day? Why, horror movies about leprechauns, of course. Syfy Channel is obliging this tradition with its original movie LEPRECHAUN’S REVENGE, which premieres Saturday night at 9 PM. The telefilm, directed by Drew Daywalt (ABSENTIA) and written by Anthony C. Ferrante (BOO), stars William Devane and Billy Zane as father and son, Pop O’Hara and Sheriff Conor O’Hara, who wind up combating the homicidal Celtic creature.

Devane, born in Albany, New York, began his acting career on stage and debuted on Broadway in THE WATERING PLACE. He made his feature film debut in 1967 in IN THE COUNTRY and seems to have been working nonstop ever since. He’s been the lead in a slew of TV shows and feature films, including Alfred Hitchcock’s final directorial excursion FAMILY PLOT, and had notable guest arcs on 24 and STARGATE SG-1, among others. He’s recently been on ABC’s hit REVENGE and will resume his role as Dr. Dix in the next Jesse Stone telefilm, JESSE STONE: BENEFIT OF THE DOUBT.

In a conference call, Devane graciously discusses his LEPRECHAUN’S REVENGE gig, his most recent work if perhaps not his most indelible.

How did Devane become involved in the project? “I’ve done a couple of things that play on Syfy,” he replies. “They’re one of the few people that know I’m still alive, and so they gave me a call and asked me if I wanted to do it. It looked like a lot of fun and I watched Drew’s stuff on YouTube a few times. He’s a really talented director, so I was happy to [work with him]. It’s always fun to work with a young talented director.”

Devane elaborates: “This is [Daywalt’s] first movie,” he adds. “He’s exactly professional and very mature, and that’s always a pleasure when you’re working with younger guys. Usually you run into a lot of arrogance in that situation and [that didn’t happen here]. He was working under a lot of pressure, trying to make a picture like this with the amount of money we had and the amount of time we had. He hung in there very well and we had a lot of fun.”

LEPRECHAUN’S REVENGE was filmed in and around Baton Rouge,Louisiana. “We had a fifteen-day shoot,” Devane recalls, “which is [fast], especially with a picture like this. But Drew had a lot of really hardcore professional crew people. The guys who made the leprechaun, the rubber suit, are hardcore Hollywood pros who came down to help him out. And so in every area, you had somebody with a lot of experience. Nobody was getting paid [much], but they were stepping up for Drew, which really turned out to be great. Everybody there was a hardcore professional and that’s what actually made the thing work.”

Something else that made it all work, Devane observes, is the universality of the filmmaking mentality. “Louisiana is a really big-time film state right now,” he says. “So you have a lot of really good crew people who are local. It’s like if you’re a fireman and you went to a firehouse. They’re firemen; they’re just like you. It doesn’t make any difference if you’re in France or Italy or wherever the hell you are. Firemen are firemen. Well, it’s the same thing with this. Crew guys are crew guys. Actors are actors. And when you’ve got somebody like Drew, who’s really positive and really relaxed about it, it’s real easy.” 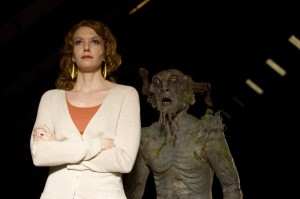 The Leprechaun is about to attack in LEPRECHAUN'S REVENGE | ©2012 Syfy

The actors were given a lot of leeway in terms of giving input on their characters, Devane says. “When you have a lot of freedom in a situation like that, it’s always fun to create that character,” he says. “So the whole idea of my guy with the hat and this jacket, everybody agreed that would work, and Billy coined the phrase ‘Lepre-cop,’ so we decided we were Lepre-cops,’ which was great. It was always fun. Every time we tried to get a little tongue in cheek with it, everybody was happier. So we took kind of a tongue in cheek approach to it and I think it worked out really good. The director has a sense of the overall feel of the piece. So if you get out of line or you kind of get off of [the overall tone], he’s there to remind you that you might be going a little too far, or maybe you’re not going far enough. That’s what the director does. He really helps you in that area.”

Speaking of directors, how was it working with master of suspense Hitchcock? Devane cites the late filmmaker’s intense proficiency and speed of work. “Hitch is like the quintessential television director,” he observes. “You go to work at nine [AM] and you’re out of there at four-thirty [PM]. Knows exactly what he’s doing and extremely professional. Clint Eastwood [who directed and starred opposite Devane in SPACE COWBOYS] is like that. When you show up, he’s ready to go, everybody’s ready to go and there’s no dicking around. There’s no fifteen-hour days or sixteen-hour days and all of that nonsense. You know what you need to do and you do it and you learn that from Hitchcock right away.” As to the late director’s sense of humor, Devane adds, “He was hysterical.”

The leprechaun of LEPRECHAUN’S REVENGE is played by Kevin Mangold under heavy makeup, rather than being embodied by a CGI effect. Devane is pleased with being able to act off another performer, rather than working opposite a blue screen. “[Mangold] was a jockey, fabulous, real athlete. He’s able to move around and have a real interesting, almost mime-like movement to it. So it was great.”

Until now, Devane says he’s never considered the possibility of leprechauns being scary. “No. They’ve always been kind of fun. Aren’t they supposed to be fun?” However, he wasn’t worried about the tone of the film. “I watched some of Drew’s stuff and you get a feel for somebody’s work, and you figure, ‘Yes, this is going to be fun.’”