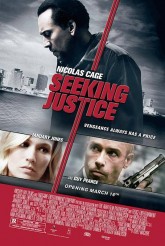 A preposterous but entertaining conspiracy thriller

SEEKING JUSTICE is a somewhat gonzo mixture of THE STAR CHAMBER, PAY IT FORWARD and any number of movies about a good man who gets himself into a bad situation. Of course, we can see that Nicolas Cage’s Will Gerard is making a big mistake long before he does. Still, thanks to some nifty action sequences staged by director Roger Donaldson, often snappy dialogue from screenwriter Robert Tannen, working from the story he wrote with Todd Hickey, and an overall bracing pace, it’s not hard to go along for this ride on the crazy train.

Will and his wife Laura (January Jones) are proud residents ofNew Orleans. Will is a high school teacher; Laura is a classical musician. Scenes of their happy lives together are intercut with a poor guy who talks to the police and is promptly murdered in baroque fashion.

One night after concert rehearsal, Laura is sexually assaulted and badly beaten. As the devastated Will waits alone in the hospital, he is approached by the sympathetic Simon (Guy Pearce), who has a proposition. Simon belongs to a little underground organization. If Will gives the word, Simon will see to it that Laura’s rapist is killed. Of course, a little favor would be expected of Will in the future …

It’s not hard to guess what that favor is, and the opening sequences point to the kind of trouble Will is about to face. Of course, big suspensions of disbelief are required on a number of levels. The first is that Will, no matter how distraught, would accept Simon’s help, and the second is that Simon would approach someone like Will. Then there’s the whole matter of how Simon’s group works. It’s not too hard to imagine the whole premise redone as a horror film – indeed, supernatural underpinnings might make it more plausible.

Still, some of the car chases, car crashes, foot pursuits and the like are pretty invigorating. Although the (mostly off-camera) rape is unpalatable as the start of what is otherwise primarily pop entertainment, at least Laura turns out not to be a wuss, and Jones has a steeliness to her that is very much to her advantage in the latter portions of the movie.

Cage is pretty much always worth watching, and here he is energetically tormented, righteous, loving, baffled and livid by turns. Pearce is suitably low-key and soothing as the vigilante par excellence. Harold Perrineau as Will’s best friend, Jennifer Carpenter as Laura’s pal and Xander Berkeley as a police detective all add rich support.

There is something serious on the surface of SEEKING JUSTICE about the potential pitfalls of taking the law into one’s own hands, no matter how justified the action seems at the time. The treatment the subject gets here pretty much deters earnest discussion, but if it’s a little too absurd to be profound, it’s at least kinetic enough to be fun.