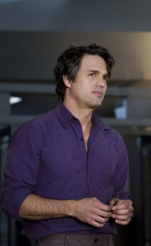 Interview: THE AVENGERS’ Mark Ruffalo Hulks Up over Joss Whedon

The actor talks about his most memorable moment during filming, plus his inspiration in playing the Hulk

At the risk of printing a big spoiler, Mark Ruffalo would like to make known what his most memorable moment was during the filming of THE AVENGERS. In playing Dr. Bruce Banner, who when angry turns into the formidable huge green Hulk, it would seem that Ruffalo has plenty of moments to choose from. At a press conference to promote the film, Ruffalo’s cohorts Robert Downey Jr., who plays Tony Stark/Iron Man, and Chris Hemsworth, who portrays Thor, both cite the scene when all the superheroes are together for the first time.

Ruffalo, however, has a different moment. “Mine was being naked in front of Harry Dean Stanton.”

When the laughter subsides,Downeyurges Samuel L. Jackson, who plays Nick Fury, who leads the Avengers despite having no powers of his own, to share. “Sam,”Downeypresses, “you must have a moment. Come on.”

Clearly inspired by Ruffalo,Jacksonsays, deadpan, “Mine was being naked in front of Harry Dean Stanton – the night before he shot the scene.”

Born in Wisconsin, Ruffalo has had an intense career in stage – not only as an actor, but also as a director, producer, writer and even set builder, all tasks he performed as co-founder of the Los Angeles-based Orpheus Theatre Company. Ruffalo’s big break in movies came when he was cast in 2000’s drama YOU CAN COUNT ON ME. Other major roles were as a dogged police detective in ZODIAC (which also starred AVENGERS colleague Downey) and a Supporting Actor Oscar-nominated turn as the biological father of a lesbian couple’s children in THE KIDS ARE ALL RIGHT. THE AVENGERS is probably the highest-profile movie Ruffalo has done to date – but then, that can be said for practically everybody involved with the film.

There are police detectives and sperm donors aplenty for those who wish to study these folks, but it’s hard to do a ridealong with a Hulk. How did Ruffalo research his AVENGERS role?

“Well,” Ruffalo relates, “I met with Joss Whedon, and he said he really liked THE INCREDIBLE HULK TV show and what Bill Bixby did with it, and so I rented those [DVDs] with my ten-year-old son, and after the third episode, he turned to me and said, “Papa, he’s so misunderstood.” And I basically based my character entirely on my ten-year-old boy, who has all of the force of nature screaming out of his body, while at the same time, everyone around him telling him to fucking control himself. And that was it. I’m sorry, I said, ‘Control,’” he adds, mindful that this is one of Banner/Hulk’s least favorite words.

Downey, Hemsworth, Jacksonand fellow panelist Chris Evans, who plays Captain America, plus Scarlett Johanneson, Jeremy Renner, Tom Hiddleston and Clark Gregg, have all essayed their respective AVENGERS characters in at least one previous movie. However, the two previous editions of the Hulk saga – 2003’s HULK starring Eric Bana and 2008’s THE INCREDIBLE HULK starring Edward Norton – didn’t result in franchises. Among the superhero characters, Ruffalo is the only one new to his role. How did he feel about stepping into the Hulk’s giant green footprints?

“It was terrifying,” Ruffalo says, “and I knew what my responsibility was, or I felt it. I made the mistake of going online and reading some of the fanboy responses to the announcement that I was playing the next version of Bruce Banner. That was a mistake – I will never do that again. I’ve never had a role been more scrutinized and criticized even before I shot a single frame. But coming onto the set with all of these guys was pretty daunting. Many of my heroes in life are in this cast, and so I knew that I had big shoes to fill, so to speak. Yeah, it was hot and I wished that I had a cool costume to wear the entire time, instead of a leotard that was painted like a Chinese checker board.” This last is in reference to the motion-capture suit Ruffalo had to wear for the scenes where he “Hulks out” – in a very impressive effect, the actor is clearly discernible within the transformed entity.

There evidently was some memorable partying during the AVENGERS shoot, though Ruffalo sounds as though his tongue is in his cheek as he recounts one such event. “I remember coming into someone’s place with a group of half-naked stuntmen in a hot tub and Scarlett Johansson standing over them with a giant ladle, making boy soup. “

What is Ruffalo’s favorite aspect of playing Bruce Banner/the Hulk? He says he sees it as a way to act out in a manner that satisfies the id in defiance of social conventions. “I liked this – we’re all told to be so well-behaved and I think we all sometimes are bursting at the seams to let it rip and Bruce Banner gets that moment and I think part of the joy for people is to actually see that happen, is exciting for us.” He laughs. “It’s a nice way for us to blow off steam in watching movies. Yes, especially for me.”