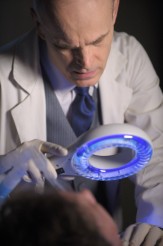 The actor talks about playing powerful people, plus THE EVENT 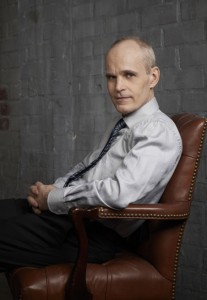 On THE MOB DOCTOR, now wrapping up its first and only season on Fox with an episode tonight, Monday at 9 PM, and a finale on Saturday, January 5 at 9 PM, Jordana Spiro plays Grace Devlin, a talented Chicago surgeon who has obligations to organized crime.

Zeljko Ivanek plays Grace’s hospital boss, Dr. Stafford White. It’s been a busy year for Ivanek, who’s had roles in four major feature films – ARGO, SEVEN PSYCHOPATHS, THE WORDS and THE BOURNE LEGACY – plus done a New York stage play. The Slovenia-born actor has been working almost nonstop since he started his film and TV career in 1981 on the soap THE EDGE OF NIGHT, followed soon by the enigmatic lead in the suspense feature THE SENDER. He was also one of the leads in NBC’s 2010-2011 science-fiction thriller series THE EVENT.

At a press event for THE MOB DOCTOR, Ivanek takes a little time to discuss his new gig – plus what happened with THE EVENT.

ASSIGNMENT X: You’ve played a lot of ominous authority figures lately. Are you happy to be in a role in MOB BOSS where you get to be a relatively good guy authority figure?

ZELJKO IVANEK: I am happy to be, because I do think there could be complications for everybody and no one gets to be just one thing. As her cover unravels a little bit and the situations pop up where I start to get suspicious about what else is going on in her life, my character has to face some questions of how to deal with that and what he’s willing to put up with. He has a lot invested in her as her mentor, but also has his own morals and principles.

AX: Is it refreshing to get to play a healer, though, after some of your other roles?

IVANEK: It is refreshing, yes [laughs], after making people’s lives miserable. That’s also another real draw. I do make a great [onscreen] asshole, apparently. I think there’s something that happens when you put me in a suit and I just have a smarmy look about me. I don’t know. I think I did some of that kind of very early on – I hold Tom Fontana responsible for some of that, the early stuff on HOMICIDE and on OZ, and at some point, you kind of get known for the things you’ve been doing most recently and it just builds on itself. So I probably do have a slightly sinister look, though I’m hoping not in my private life [laughs].

AX: You started out in feature films playing the troubled, ethical young man …

IVANEK: There was more of that – yeah. I don’t know. It’s been a string of that, and it’s been nice every time you shake that up a little bit, but it’s also really fun to do. If anything, you just look at it as, how interesting is the part itself. The good guy/bad guy part of it, as long as you don’t feel you’re sort of just repeating the same character, there are a million ways to go with that stuff.

AX: But you have played a lot of bad guys recently …

IVANEK: Very often, it’s juicier. On DAMAGES, for instance, I thought it was more or less a decent guy [laughs], until that shift in gears and I found out otherwise. So sometimes as you get more of a handle on things, but there’s also plenty of ways that good people get challenged in their lives and try to figure out are they really who they think they are and then have to kind of reassess themselves, and that was what drew me to THE EVENT; it’s what drew me to this as well.

AX: You had been working for HBO for a block of time, with BIG LOVE and TRUE BLOOD. You did THE EVENT for NBC and you’re doing THE MOB DOCTOR for Fox – is there any kind of experiential difference for you as an actor between network and cable, or is that more a writers’ room issue?

IVANEK: I think the experiential difference to me is just literally the mechanics of it. If you’re making twelve, thirteen episodes for HBO or FX, versus twenty-two episodes of a network show, that’s just a different workday at some point. At the end of a season, when you see what a crew goes through, what the lead actors go through, what the writers go through to maintain that pace, that is a really tough slog, and that doesn’t mean that twelve, thirteen episodes of DAMAGES was also not a tough slog, but I think you have a little more breathing room to not be taking on so much all at once, and that to me is the biggest difference, and that might be the biggest shift, maybe as the industry goes forward, is to open up more opportunities, even in network television, for that kind of schedule.

AX: Did you do any research into being a doctor for this part?

IVANEK: Jordana went to theColumbiaFilmSchool, so she had an in atColumbia and had gone a full night on rotation with one doctor, and several others as well. She helped me set that up, so I went to Columbia Presbyterian inNew York and spent the day with an attending surgeon, a resident. That was, separate from whatever information was for the show, just a remarkable experience. Just to see these people deal with what they deal with in one day, the pace that they move at, the incredible competence, the kind of controlled chaos of it – it was so interesting. I watched three surgeries, and we had a couple of surgeries in the pilot, and it looks fantastic. It’s very cinematic, but it’s very focused, and that’s what I came away from the hospital with is, there’s four million things going on all the time. The surgery’s happening here, but the nurses are talking there, someone’s walking in and out the door constantly. There’s a constant sense of controlled chaos. And then also just the sheer compassion in the people and the circumstances that they work under. I got there at seven in the morning and then umpteen hours later, at two in the morning, I wrote an email to the doctor to say thank you and please thank everybody on your staff, and she emailed me back – she was still at work. And that’s not on a movie set, where frankly you can’t do anything disastrous, it’s at a hospital where you’re looking after people for twelve hours, fourteen hours, twenty-four hours in a row, so that was a huge, huge help.

AX: Has anything about this grossed you out at all?

IVANEK: I watched this astonishing hernia operation – I saw two hernia operations, one of which was going through the belly button and an incision of literally about an inch, and another that completely split someone’s chest open and there was basically nothing on the inside that you couldn’t see. It was engrossing [laughs]. The difference between standing there and watching it and them actually digging their hands in and reaching under things – that I don’t think I could do [laughs], but I was happy to find out that I could actually watch and appreciate it without getting completely grossed out.

AX: You were doing a play in New York this summer …

IVANEK: It’s called SLOW GIRL, atLincolnCenter. They built a brand-new theatre and we opened the theatre with the show. We extended a couple times already, but with this, I couldn’t extend any further, but we had a really good time.

AX: How much are you going back and forth between TV/film and stage?

IVANEK: I hadn’t done a play in five years. This was the first one in five years. So over the life of my career, I have. More recently, it’s been a lot more TV and movies, so this timeslot just worked out great, so I’m hoping there will be more.

AX: Were you happy with the way THE EVENT wrapped up? It ended fairly abruptly

IVANEK: Yeah. I think we were all a little frustrated. There was more story that they wanted to tell. I think they were trying to see if they could set up something at one of the cable channels to try to wrap it up in a miniseries and the economics of that, I think, just got in the way. Yeah, when you’ve got something with long-range storytelling and you suddenly are interrupted, I think that’s a frustrating outcome.

AX: You tend to play a lot of authority figures – you were the Magister on TRUE BLOOD, you were a government high-up on THE EVENT, now you’re a chief surgeon on THE MOB DOCTOR …

IVANEK: It’s fun to play power. It’s fun to walk into a situation where everybody has to kind to turn to you and how it plays out.

IVANEK: You just have to be [thinking], what kind of personality is drawn to that, to that kind of control, and I think just trying to figure out, how do people approach that? That was one of the interesting things about actually visiting at the hospital, watching somebody who was in control, this amazing doctor, and seeing how she handled the position of authority. It was kind of not what I expected. It was incredibly collegial – she was very much in control, very confident, but the sense of the power dynamics almost was invisible. And that’s actually one of the biggest things I came away with, is trying to figure out, how do you do that, how do you control people without the overt sense of controlling people [laughs]? And this being a hospital environment, a little different from stuff I’ve done before, I’m kind of curious to see how that plays out.

AX: So are you trying to put more of that in?

IVANEK: I’m going to see. I want to have a sense of somebody who’s not just barking orders everywhere, that this is a teaching hospital, that this is a place where people are learning. That’s the primary function, so how do you do that the best way you can, and it’s not by asserting your power all the time.