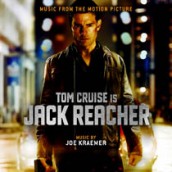 If you’re thinking of the musical roller coaster excitement that filled last Xmas’ MISSION IMPOSSIBLE picture, then you don’t know JACK. JACK REACHER, that is.

That’s because Tom Cruise means business as an ex-homicide military detective with his own brand of law. As a result, Joe Kraemer’s darkly intriguing score resonates with near-continuous, tightly-clenched brooding that plays like the wind-up to a gut punch. Pretty much absent from the big screen after delivering a noteworthy, cult score for his pal Christopher McQuarrie’s WAY OF THE GUN back in 2000 (not that Kraemer hasn’t been busy since on stuff like FEMME FATALES since then), it’s a testament to the filmmaker’s loyalty not to go for the bigger, usual composing guns.

But as opposed to the vanilla that might have been, JACK REACHER has real musical character that takes no prisoners. Reminiscent of Howard Shore’s sinister work in SILENCE OF THE LAMBS and SEVEN,if a tad more heroic, REACHER also touches on the suspenseful, conspiracy-filled sound of 70s cinema. Strings and brass are always eyeing the surroundings for evil, with no typical “action” music to speak of. Yet Kraemer has a good, tense theme that maintains your interest amidst the threatening orchestrations, his score finally rising to neo-patriotic heights for the most stirring end credit roll this side of ARGO. More then adding the remaining 10 inches and 90 pounds to comfortably fill Tom Cruise’s physique into JACK REACHER‘s literary frame, Joe Kraemer proves himself as this year’s best bad-ass musical makeup artist, one who will hopefully be committing far more major Hollywood crimes to come after this.

Click on Link: To Purchase the JACK REACHER soundtrack