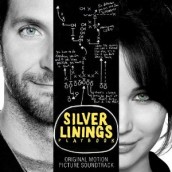 If this golden PLAYBOOK had a dangerous sense of unpredictability that gave its lunatic love story a real edge, then part of that credit goes to filmmaker David O. Russell’s surprisingly whimsical choice in music for SILVER LININGS PLAYBOOK. And one particularly inspired choice was giving Danny Elfman, a composer best known for ghoulish black comedy, the chance to go for positively sunny quirk. Think John Lennon in Elfman’s peace and love guitar stylings, beatific chorus and quirky percussion that keep addled time with Bradley Cooper’s bipolar trash bag runner, almost reciting his screwed-up positive mantra to get his life back on track.

There’s real poetry to Elfman’s stripped-down acoustic approach, piano and bells also resonating with a life lost to mental illness, and the longing for love that isn’t going to arrive the way his character imagines it. It’s a headspace that’s eccentric without being condescending, showing off the man behind the manic rhythms of Oingo Boingo as being equally adept in a far folksier musical realms. And it’s the fact that his style is just about impossible to recognize here which the biggest testament to his diverse talents. 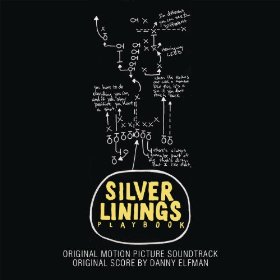 While Elfman’s complete, if short underscore is available on iTunes, you can also hear some choice cuts of his in the LININGS song-soundtrack which is also worth getting, especially for Russell’s use of Stevie Wonder’s cheerful “My Cherie Amour” as a fire alarm to its protagonist’s ears. Russell’s picks are all over the place in an interesting, hip way, ranging from the defiant country rock of Alabama Shakes to the Dave Brubeck Quartet’s hand-clapping and the Tiki kitsch of Les Paul & Mary Ford. The winningly eclectic vibe is also apparent in CrabCorp’s dry as toast take on “Monster Mash,” the soulful strumming of Bob Dylan and Johnny Cash’s “Girl From the North Country” and the saccharinely upbeat pop of Jessie J.’s “Silver Lining.” Playing like a grab bag station that’s going through an addled mind, the two soundtrack playbooks offer unpredictable surprises of the best kind.

Click on the link to Purchase the SILVER LININGS PLAYBOOK score