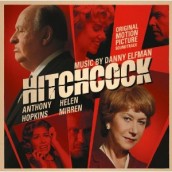 Danny Elfman plays a sly, un-psychotic side of the Master of Suspense

If Gus Van Sant’s near frame-for-frame modern recreation of PSCYHO ranks as one of the most unneeded and unnecessary remakes of a classic ever, at least it allowed Danny Elfman the opportunity to do a slavishly spot-on re-performance of Bernard Herrmann’s infamous score in the new film HITCHCOCK. Now in supreme act of meta-composing, Elfman gets to go behind the curtains of the Bates Motel to musically unmask the “real” master of suspense and the tense production of his pet project, with a voice that echoes Herrmann’s as much as it does Elfman’s own penchant for blackly ironic comedy.

Far more in the spirit of Tim Burton than Alfred Hitchcock, Elfman’s peppy percussion and strings suggest a waltz macabre, or at least the ticking gears that are constantly whirring about in brilliantly warped imagination. But as opposed to the menacing noir sound that Philip Miller painted for the filmmaker in the far more unforgiving HBO BIRDS making-of  THE GIRL, Elfman musically sees HITCHCOCK in loveably Gothic terms, with an overall bright, bell-lined tonality that sees the cineaste as a droll prankster who thinks scaring his audience witless is the best trick of them all.

There’s certainly darkness to be had in the alternately stormy, and subtle music for Hitch’s creative possession by real psycho-killer Ed Gein, as well as his perceived marital woes with Alma- domestic tsuris that nicely recalls Elfman’s score for the twisted mother-daughter relationship of DOLORES CLAIRBORNE. The composer also takes particular delight at spinning Herrmann’s romantic, string-heavy sound into some interesting, and playfully modernistic directions that likely would have the composer turning about in his grave (though not as angrily as his wholesale appropriation for THE ARTIST likely did). If this “true” story of HITCHCOCK seems as fancifully sweet and lightweight as a Doris Day picture with a butcher knife (if still infinitely better than that PSYCHO redo), hearing Elfman work his Gothic kinks out once again is always reason to celebrate.

And if the slashing strings of PSCYHO didn’t immediately identify Herrmann (with the shower scene music thankfully not repeated here), then the orchestral version of pianist’s Charles Gounod’s “Funeral March For A Marionette” comes in second as the signature theme for ALFRED HITCHCOCK PRESENTS,  a darkly droll piece that’s wittily used to wrap the album up with.