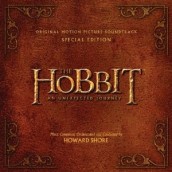 Probably the best reason to celebrate Peter Jackson’s plodding return to Middle Earth in THE HOBBIT is that it gives Howard Shore a chance to once again make the aural trek from Hobbiton for THE HOBBIT: AN UNEXPECTED JOURNEY. The fact that listeners will feel they’ve already been on this familiarly epic road for a good long time makes for a welcome sense of return to the dictionary’s worth of musical vocabulary that Shore had so painstakingly set up in the previous LORD OF THE RINGS saga. Now THE HOBBIT more than proves the axiom that if it something ain’t broke, then there’s no reason to try and fix it. Rather, Shore spruces up his musical mythmaking with pleasing, and often thrilling results.

Like some cos-play convention as soundtrack, THE HOBBIT rings with the warmth of fans running into their old dungeons and dragons friends. In this case, it’s making merry with any number of the themes that filled the last three scores, from the footloose and free motif of the Hobbits to the magical chorus of “The White Council” and the ferociously throttling rhythms of Orcs on Wargs.

With Middle Earth not yet in full-on danger from Sauron, there seems to be a more adventurous touch to this prequel soundtrack. But then, can one can even dare to say that about a score saga whose densely packed leitmotifs and brassily booming, near-constant orchestral sound will likely make it our answer to Wagner’s “Ring” cycle? While there are new themes aplenty, Shore’s committed work is all part of a glorious wash that’s pretty much on par with what’s come before it, climaxed with a stupendous “Out of the Frying Pan” and “A Good Omen,” a cliffhanging battle with the fiery forces of evil given the deliverance of a majestic, eagle-delivered chorus that arguably delivers a bigger bang than Shore’s rescue of Frodo from Mount Doom.

Continuing in the winning tradition of writing captivating fantasy songs, Shore comes up with a cute “Blunt the Knives” and the stirring dwarf anthem “Misty Mountains,” which gets a radio ready version for the end titles. The “Special Edition” of the soundtrack truly delivers the goods with extra score cues that are anything but afterthoughts, along with a guided liner note trek-along of Shore’s work by RINGS  music authority Doug Adams.

Click on Link: To Purchase The Hobbit: An Unexpected Journey soundtrack