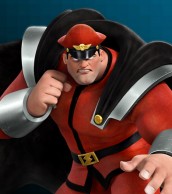 In the venerable videogame franchise STREET FIGHTER, M. Bison is a Boss, aka top villain, character. M. Bison appears as himself in Disney’s new 3D animated hit WRECK-IT RALPH. Without providing big spoilers, let’s just say that we see a very different side of M. Bison in RALPH than we see in STREET FIGHTER.

Actor Gerald Rivers has been the voice of M. Bison for any iterations of STREET FIGHTER. We caught up to him on the WRECK-IT RALPH red carpet, where he was extremely cordial and friendly in discussing voicing M. Bison’s guest turn in RALPH.

ASSIGNMENT X: How long have you been voicing M. Bison, and in how many versions of STREET FIGHTER?

GERALD RIVERS: It’s been four or five versions, and for a few years now. So all the latest ones, including the Deluxe, including the STREET FIGHTER X TEKKEN, I’m the M. Bison.

AX: Do you think that M. Bison would hang out with the group that he’s hanging out with in WRECK-IT RALPH?

RIVERS: [laughs] Based on the storyline in the film, [yes]. We know that people who are engaged in things in public, they are also engaged in things in private that a lot of people don’t know about. I guess I’m glad M. Bison has a place to go among his peers and still be who he is, and yet be able to say something a little different than he would say in the game. Because as we know, in those meetings, what’s said there, stays there.

AX: Were you the person who made the decision as to whether you would do this movie, or did the STREET FIGHTER people say, “We made this deal with Disney for them to use M. Bison, go”?

RIVERS: No. Disney called my agent directly and there wasn’t even an audition. Disney said, “We want the guy who voices M. Bison in STREET FIGHTER.” I imagine they’d already gotten clearance from the STREET FIGHTER franchise, which is huge and international. By the time I got the call, it was a done deal and I was grateful to just say yes.