oz the great and powerful 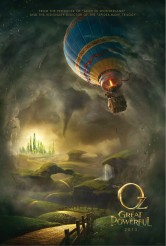 Even though the current poster for OZ: THE GREAT AND POWERFUL looks very much like THE WIZARD OF OZ, director Sam Raimi says it shares the DNA of the L. Frank Baum books, but this is a prequel not a remake or sequel to that beloved 1939 film

“We all loved THE WIZARD OF OZ and we were careful not to tread on it and careful to respect it,” admits Raimi. “Ours is a different story that leads up to THE WIZARD OF OZ. It’s how the Wizard came from Kansas to the land of Oz. It’s about a selfish man who becomes a selfless man. So this is a loving nod to [the original] and then we went ahead with our own story.”

The director also says this is a departure from his other films as well.

While James Franco plays the Wizard in this film, the biggest news is the appearance of his brother Ted Raimi and EVIL DEAD cohort Bruce Campbell.

“Yes, Ted plays a tiny part, otherwise my mother would have my head,” says Raimi. “Bruce Campbell has a bit part because he was bust shooting his TV show. He did take a day off and did a little tiny role. It’s really fun to watch him in the picture, but I can’t tell you what it is.”

OZ: THE GREAT AND POWERFUL arrives in theaters March 8, 2013