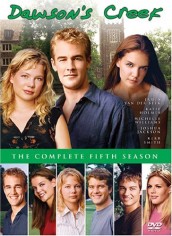 While promoting her new film OZ: THE GREAT AND POWERFUL, Michelle Williams was asked by the press whether she would consider doing a DAWSON’S CREEK reunion movie where she played Jen Lindley from 1998 to 2003. Her response is quite surprising.

“I would,” she admits. “I’d very happily do a reunion show, but I don’t know what it would be since my character died in the end. There are certain limitations – either I come back as a ghost or you film me through a gauzy lens in flashbacks as my 19-year old self. I would love to. Independently, we’ve all said that at some point. I hope it does happen and it’s a way to honor the past. It was a big deal for the four or five of us and it was a big deal for the people who watched it.”