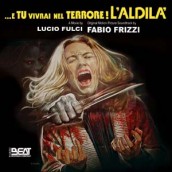 ©2011 Beat Records
THE BEYOND soundtrack
Reviews

When it comes to the blood-soaked explosion of Italian horror, or the combos of orchestral suspense and progressive rock that accompanied these films’ stylish vivisections, two of the names that come to fans’ minds (or the gaping holes through their heads) are Roman gore auteur Lucio Fulci and his frequent composer Fabio Frizzi.

For if Fulci’s makeup effects weren’t enough to unsettle even the most stomach-hardened genre addicts, it was Frizzi’s moaning, borderline-psychedelic soundtracks that made them far more disturbing and eerie- as if the images were being telegraphed from a truly unhinged mind in the underworld. Both men ventured to America for two of their most popular, and infamous collaborations, trips that have warranted two re-releases by Italy’s Beat Records.

First up is The Big Easy, where a hotel holds a gate to hell itself in THE BEYOND (aka the album title of E TU VIVRAI NELL TERRORE! L’ALDILAL). Murder is the passkey in, and Fulci balances a satanic mood of Latin “Dies Irae” choruses, moaning voices and a small, symphonic palette with surprisingly lyrical passages for string and flute that reflect a female heroine severely in need of a real estate agent. Carried by especially strong, repeating themes for both the orchestra and chilling funk rock, what makes THE BEYOND as scary as it is groovy is that Frizzi’s music captures a growing, melodic sense of dread that gets under your skin, as opposed to playing the savagery of the makeup effects that rend it.

Ditto the Egyptian-flavored horror that possesses the equally thematic music of MANHATTAN BABY, an even more ambitious score wherein a tyke does some particularly twisted things in the Big Apple, courtesy of a spirit that’s anything but a mummy. Frizzi contrasts its age-old evil with the girl’s corrupted innocence as rock vibes mix with ethnic percussion, and the pleasant bell-sounds we’d associate with childhood, but gone terribly wrong. Where THE BEYOND offered Dixieland source cuts, MANHATTAN BABY goes for urban jazz sax riffs, with the last track offering Frizzi himself extolling Fulci’s values to fans in both Italian and English over sinister Egyptian beats. Rarely has more gracefully creepy scoring accompanied memorable excess as these two soundtracks that are manna from heaven for horror geeks.

Clink on the link to buy THE BEYOND soundtrack