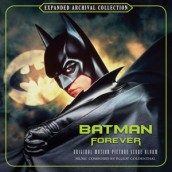 Where it seemed that the first two scores in the BATMAN franchise were as crazy as you could get with the Wagnerian approach to superhero scoring, then Elliot Goldenthal’s next two entries made Danny Elfman’s brilliant, demon circus takes seem positively somnambulant in comparison. If anything, Goldenthal’s BATMAN FOREVER and BATMAN AND ROBIN scores are like two alarm clocks, screaming through your senses as they mash together the 60’s jazz kitsch that Neil Hefti gave to the television show, along with the brash, brassy experimentalism of John Corigliano’s concert hall works in the 80’s- modernism that changed the face of film scoring with his soundtrack to ALTERED STATES.

It’s no boy wonder that Goldenthal was Corigliano’s Robin, running with his master’s dissonant approach to blaze onto the Hollywood scoring scene with his brazen WTF work on ALIEN 3, INTERVIEW WITH A VAMPIRE and DEMOLITION MAN. But even the latter cult film’s avant-garde zaniness didn’t come close to the colorful, blasting weirdness that Goldenthal gave to BATMAN FOREVER,  an approach right in unrestrained tune with director Joel Schumacher’s attempt to return the film franchise to its lighter Adam West identity. It was a way over the top pop art revamp that paid off handsomely on all counts, or at least the first time out in Schumacher’s case.

For despite all the shrieking brass runs and blaring orchestral bombast that relentlessly powers the film, there’s a definite method to Goldenthal’s madness for a BATMAN that relishes in its pseudo-analyzing of split identities. The composer brilliantly makes those characters’ thematic distinctions apparent, from a surging, heroic march for Batman and Robin to a piercing, voice-topped Theremin that suits the Riddler’s mind-controlling device and discordant rhythms that capture Two-Faces psychotically scarred mood swings. And if that wasn’t enough, there’s a constant surprise, invention and fun to Goldenthal’s hellzapoppin’ approach as he adds to his well-defined musical characters with a Tango, Gothic eeriness, salutes to Philip Glass and sultry piano romance for Nicole Kidman’s eye candy. It all adds up to a soundtrack that’s as crazy as it is mainstream in its objectives, not to mention one of the most successful examples of musical excessiveness in film scoring history.

La La Land Records follows up their comprehensive, two-CD re-issues of BATMAN and BATMAN RETURNS with two hours of Elliot Goldenthal’s complete score, a presentation that reveals just how much more subtle complexity there is to BATMAN FOREVER beyond its berserker approach. It’s also gloriously louder than ever with a newly re-furbished sound that truly shakes the roof of the batcave, complete with the original Atlantic Records presentation. Extra kudos on this jam-p acked set go to the spandex seamless editing of Neil S. Bulk and booklet layout by Dan Goldwasser, which features incisive liner notes by “Returns” writer John Takis, who does his best to make verbal sense of out of the glorious musical insanity that rules FOREVER‘s roost.

Now if only the soundtrack quadrilogy could be completed with a first-ever release of Goldenthal’s equally desired, and even more lunatic BATMAN AND ROBIN score, a wealth of musical riches amidst a cinematic embarrassment. Unfortunately, we’re not likely to see that ultimate soundtrack come out until Schwarzenegger freezes over.

Clink on the link to buy BATMAN FOREVER  soundtrack