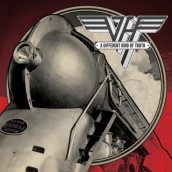 They don’t party like it’s 1984 anymore, but Roth lovers may be drawn into a familiar mix of thrashing guitar licks and uninspired lyrics

You won’t be partying like it’s 1984 when you start listening to the new Van Halen album A DIFFERENT KIND OF TRUTH – the first featuring David Lee Roth on vocals in 28 years.

In fact, you’d be hard-pressed to party like it’s 1975, 1976 or 1977 – the years in which the scraps and seeds of many of the songs included here were originally conceived by guitarist Eddie Van Halen and Roth.

Instead, A DIFFERENT KIND OF TRUTH is a messy, frustrating and ultimately soulless album. It’s a cash cow to the nth degree, amplified by the fact that Halen and Roth had to dig into the past to find new music instead of moving forward with newer, fresher and perhaps more challenging material.

While the Roth-led Van Halen certainly had its highs – and its share of great songs that have stood the test of time, I would argue that when Sammy Hagar took over, the group really graduated into more complex and daring material. It was a different texture, style and definitely a more polished sheen that was brought into the mix, but most importantly, Hagar was a musician/singer, Roth just sings.

And as Roth coasts through the 13 tracks here, it’s a total grab bag. Some times he’s screeching like his old self, other times he’s reciting deep vocaled poetry that completely gets in the way of the music and other times he sounds like your drunk grandpa trying to get his spandex on and, well, sadly, it just doesn’t fit.

While I hated “Tattoo” when it was released as the first single, surprisingly, it’s one of the better songs on the set (and grows on you with repeated listens). I still can’t stand Roth’s deep-throated vocals sprinkled throughout (it’s too damn creepy), but at least it sounds somewhat modern.

The best song is actually “Big River” which sounds like classic Van Halen (and well it is, since it’s one of those 1970s leftovers remade for 2012). It’s simple, sweet and has a great propulsive beat. I also liked the strange, bluesy “Stay Frosty” which is guaranteed to become a staple of their live shows.

Everything else on the album sort of stumbles or falls apart (there are five originals that were recently written, with only “Stay Frosty” really standing out among the pack).

The other big question is how Eddie’s son Wolfgang Van Halen does on bass. While many would prefer to have Michael Anthony back in the mix, Wolfgang fits in with the group just fine.

After the debacle of the Gary Cherone-led Halen for one uninspired album (though the first single off that disc “Without You” is better than anything on this release), there was only one place for the band to go and that was reunite with Hagar or reunite with Roth.

Purists will prefer Roth and they got it, but I just wish there was more here. I was looking forward to hearing what Van Halen had in store after more than 14 years in between albums. Sadly, not much.

That said, A DIFFERENT KIND OF TRUTH will still be a huge hit. Bringing Roth back was a coup and there is some logic in mining the past in hopes of recapturing it. Is it shameless? Yes, but it sure beats the alternative – having a fourth singer come into the mix and I don’t think Van Halen could support the weight of Van Halen – the Adam Lambert years.