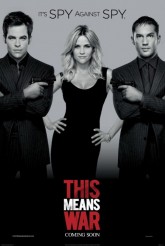 This means a potentially intriguing twist on several genres gets turned into a very predictable rom-com, with explosions

In THIS MEANS WAR, two top-level CIA agents, partners at work and best friends in life, find that they have fallen for the same woman. This turns into a rivalry in which the two men deploy all sorts of surveillance (our tax dollars at work!) in the hopes of getting information that will put them in the lead when it comes to said woman’s affections. This has the potential to be very funny, very weird or really icky. Given the nature of the jobs of two of the three main characters, it also has the makings of an action spectacular. Under the direction of McG, we do get bursts of major explosive derring-do, but otherwise, the movie is strangely bland and astonishingly predictable.

FDR (Chris Pine) and Tuck (Tom Hardy) survive a mission in Hong Kong that leaves them with vengeful enemy Heinrich (Til Schweiger) still at large and irate boss Collins (the formidable Angela Bassett) confining them to desk duty while the international fallout gets managed. Tuck, who still harbors feelings for his ex-wife (Abigail Leigh Spencer) and adores his young son Joe (John Paul Ruttan), feels he ought to try dating again, so he signs up for an online matchmaking service.

Product evaluator Lauren Scott (Reese Witherspoon) is borderline married to her job. She’s smart, gorgeous, funny and kind, and yet doesn’t have men falling all over her. (So it’s a fantasy.) An encounter with her ex-boyfriend and his new fiancée leave Lauren so devastated that her married best friend Trish (Chelsea Handler) signs Lauren up for an online matchmaking service. Tuck and Lauren like each other’s profiles, agree to meet for coffee – but FDR, suspicious of a woman who would embark on online dating, insists on being within retrieval distance of Tuck in case things go wrong. The coffee date goes great, but afterwards, Lauren enters the video store where FDR is lurking. Not realizing this is his pal’s new gal, FDR flirts with Lauren, then tracks her down to work and presses so hard for a date that Lauren relents. Then FDR and Tuck realize they’re both attracted to the same woman. They begin a gentlemanly agreement where they’ll let Lauren choose between them, without mentioning to her that they know one another.

A moment here to share with readers the significance of the use of “and” vs. “&” in writing credits on films and television episodes. The ampersand indicates that writers worked as a team; the “and” means they did their jobs separately. The screenwriting credits on THIS MEANS WAR are screenplay by Timothy Dowling and Simon Kinberg, story by Timothy Dowling and Marcus Gautesen. This means the script got substantial work done by at least three different writers (there may have been more who didn’t do enough to receive screen credit). Some version of this may have had more personality, unpredictability and overall life to it, but the final product is so smoothed out that we can almost tap out a rhythm in time with the story developments.

We can guess this is going to happen early on, when Lauren’s friend rather than Lauren herself puts Lauren on the dating service. This is not a new plot device, and it seems designed to make our heroine adorably diffident, instead of able to decisively make a move. After that, everything about the movie, including how serious action will re-enter the story and Lauren’s ultimate choice, go pretty much as we anticipate.

The main fun here – and it sometimes is great fun – is the banter between Pine and Hardy. The two sound like guys who have been riffing off each other forever, and whether they’re working, playing or insulting each other, what they’re saying sounds spontaneous and occasionally inspired.

FDR’s initially aggressive tactics aside (most people would be appalled rather than attracted), the romance is agreeable but nothing to swoon over. The big action scenes are proficient without raising goose bumps, the villain behaves villainously and the surveillance stuff is sometimes amusing, if it’s not taken seriously. The movie so totally doesn’t have a sense that this kind of stalker behavior is not something one looks for in a future life mate that one either has to suspend objections completely or else go to another movie altogether.

Taking a meta-view, it’s downright weird that a film with such a potentially controversial plot device can otherwise feel so by the numbers. Fans of Pine and Hardy, or even just enjoyable bromance, will be pleased. Others will simply be impatient, or perhaps a little nonplused.

Related Link: Exclusive Photos from the THIS MEANS WAR premiere