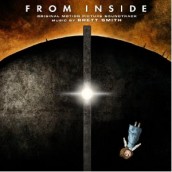 ©2012 Lakeshore Records
FROM INSIDE soundtrack
Reviews

CD Review: FROM INSIDE soundtrack

If you’re a pregnant woman on a post apocalyptic train ride to hell, then the least you deserve is a first class ticket, especially when it comes to setting the musical mood while traveling past oceans of blood, festering corpses and nuked landscapes. Much like the expectant mother who can only watch in transfixed horror, composer Brett Smith conveys a sense of nightmarish wonder to match the beautiful, depressing damnation of graphic novelist-turned animator John Bergin’s award winning feature FROM INSIDE.

There’s nothing easy about absorbing INSIDE‘s shocking, Francis Bacon-like imagery. But far from reveling in the excesses of the end of days, Bergin wants to go for artistic impressionism at every twist of the tracks- a responsibility that perhaps weighs heaviest on music that has to fill a soundtrack that’s otherwise composed of first-person narration and a few sound effects. To go for outright, shrieking horror would be death itself for an already relentless picture like this. But Smith makes absolutely the right choice by employing a minimal approach that hears the dread, and wonder of life growing inside one’s body, as contrasted with the bigger picture of a world without hope. Indeed, the spark Motherhood and hope subtly fill his score, from baby-like music box chimes to a tender piano and the religious transcendence of a woman’s voice.

But the light also can’t help but be tainted as well with such self-explanatory cues as “Wasteland,” “Bodies” and “Slaughter,” as aching violins join with twisted, scraping samples to create a mesmerizing sense of tragedy. Smith’s score isn’t afraid to shrink back from outright ghastliness either, using percussion to relentlessly drive the charnel train ahead to its fateful destination, smashing through barriers with rock guitars and chattering with gnarled string voices that only our heroine can make sense of. FROM INSIDE ends up as a nightmarishly transfixing tone poem, riding proudly alongside such other hypnotically atmospheric scores as Mark Isham’s THE HITCHER, John Murphy’s 28 DAYS LATER and even the bliss of Lisa Gerard’s WHALE RIDER.

While Brett Smith’s ambience washes over you in a way that bears repeated listening, it’s likely that even the stoutest viewers couldn’t take more than one trip with the picture itself. But what a captivatingly bleak and impressive voyage it is, as John Bergin creates “adult animation” in the best, and most troubling sense of the word. Be sure to check out the film’s visceral shock and visual awe as a YouTube rental, or get your ticket for the hellride on DVD by going to frominsidemovie.com.

Click on Link: To Purchase the FROM INSIDE (Original Motion Picture Soundtrack)