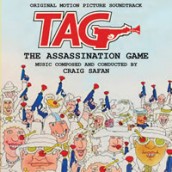 Composer Craig Safan is number one with a quirky bullet

For a label that’s continually unearthing a certain generation’s cult obscurities like HARDLY WORKING and STARCHASER: THE LEGEND OF ORIN, Buysoundtrax makes one of their most pleasurably eccentric discoveries with 1982’s TAG: THE ASSASSINATION GAME.

Written and directed by former Shape star Nick Castle to capitalize on the then-phenomena of “Assassin” games sweeping college campuses, TAG of course has those suction cup hijinx turn to real ammunition, the game going awry to the alternately satirical and lethally chilling strains of composer Craig Safan. Like the crazy kids who play at being as cool as the murderous big boys, Safan is given the budgetary resources of a small ensemble to capture the cat and mouse contest where there’s only one winner.

But that small orchestral size is right in tune with TAG‘s winning black comedy, its music successfully navigating the danger zone between being funny and serious, with even the most menacing passages carrying a bizarre wink. But beyond its unhinged string suspense and bubbling clock-tick samples, what really distinguishes TAG‘s score is Safan’s jazz chops that manage to hit the bulls-eye from 40’s film noir to CASABLANCA piano bar stylings, as well as Stephane Grappelli violin swing and moments of Inspector Clouseau-worthy craziness. With bigger targets just ahead of Safan like THE LAST STARFIGHTER and REMO WILLIAMS, TAG is number one with a quirky bullet.

Click on Link: To Purchase the TAG: THE ASSASSINATION GAME soundtrack