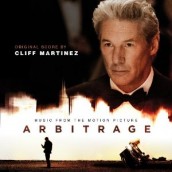 His characters are often under intense pressure, with no easy way out in sight. Not that most of Cliff Martinez’s scores sweat their predicaments out in the traditional sense, preferring to speak volumes for the agitated states of bank robbers (THE UNDERNEATH), drug dealers (TRAFFIC) and the fate-cursed (FIRST SNOW) through the tides and ebbs of pulsing, rock-inspired rhythms and suspenseful, dream like sustains.

Now the former Chili Pepper has segued from from the monosyllabic getaway man of DRIVE to the far more talkative, and rich antihero of ARBITRAGE the kind of mogul who prefers to put others in the hot seat. It’s an equally exceptional film that’s very much in the same existential headspace, yet with a sleeker groove that isn’t about to get its hands dirty, let alone kick some guy’s head in. Beautifully contoured to a visual palette of Manhattan elegance that hides a wealth of financial and sexual cheating (as well as a woman’s accidental death), Martinez doesn’t so much turn the screws on Richard Gere’s sexy spin of Bernie Madoff as much as he caresses them. Clearly defined themes float through the score as tension is expressed through a sleek melange of pulses, heartbeats, sharp guitar chords and a Chinese water garden’s worth of bells, all rhythmically combining for the sense of an ethereal noose drawing ever-tighter.

ARBITRAGE is proof positive of how smart adult suspense can be even more effective with a hushed, experimental indie whisper as opposed to a traditional orchestral scream, as delivered with Martinez’s transfixing style. Even more explicitly strange in an Asian tinkertoy way is Bjork’s quavering vocals for “I See Who You Are,” with the classy Bossa Nova of Getz, Jobim and Gilberto, Billie Holiday’s lush life vocals and Robi Botos’ lite piano jazz complementing a highly appointed Manhattan ambience that’s rotten to the core.