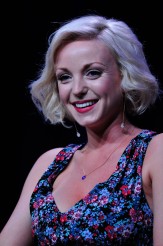 The actress talks about her dedicated but fun character

The drama series CALL THE MIDWIFE was a huge success when it premiered earlier this year in the U.K., and now that it’s airing on PBS (Sundays at 8 PM in the Los Angeles market, check local listings), it’s captured devoted U.S. audiences as well. Based on the three-book series of memoirs of real midwife Jennifer Worth, CALL THE MIDWIFE follows the trials and travails of well-to-do Jennifer Lee (played by Jessica Raine), who becomes a midwife with a group run out of a convent in the slums of East London in the 1950s.

Jenny isn’t the only non-nun in the group of midwives. Another is Trixie Franklin, played by Helen George. Trixie takes her work with expectant mothers very seriously, but she’s otherwise extremely high-spirited and, certainly by the standards of both the era and the nuns, a little on the wild side.

Actress George has largely been a stage actress, but her other TV credits include the British series HOTEL BABYLON, THE DOCTORS and DARK MATTERS: TWISTED BUT TRUE; she was also in the recent remake of THE THREE MUSKETEERS. At an event arranged by PBS for the Television Critics Association, George talks about her vibrant period MIDWIFE.

ASSIGNMENT X: Were you aware of the CALL THE MIDWIFE books when you went up for the role of Trixie?

HELEN GEORGE: I’d heard about them, because they were such a success inEngland that, fantastically, we had a fan base waiting for us, because so many people have read the books. Just before the casting, I managed to read all three of the books. I read them on the tube and people must have thought there was something wrong with me, because I cried all the time, because they’re just so emotional and emotive, so I loved them.

AX: The Jenny Lee character doesn’t fit in because she’s not a nun and she’s from this upper-class background. Your Trixie seems more lively –

Bryony Hannah as Cynthia, Jessica Raine as Jenny and Helen George as Trixie in CALL THE MIDWIFE | ©2011 Neal Street Productions

AX: How does Trixie feel about living amongst a group of nuns?

GEORGE: I think it’s such an unusual setting, that she should be surrounded by these nuns. It’s a funny one for her, but she deals with them.

AX: The birth scenes are depicted very realistically, which is to say with a lot of blood and bodily fluids. Is there anything in this that grossed you out at all?

GEORGE: [laughs] Well, to begin with, I suppose everything, but you very quickly get used to it. Even just going down the nether end of a lady was a strange thing to get used to, and just saying, “Hook your legs up and there you are in position,” but now it feels so natural, I really think I could do it [be a midwife] in real life [laughs].

AX: Is having to have another actress put her legs in your arms for the birthing position at all comparable to doing a love scene with a man, where you’ve got to discuss, “Now, I’m going to put my hand here …”

AX: How is it working with so many other women?

GEORGE: On paper, it could be a nightmare, but – it’s a cliché, but we get on so well and a lot of the time, we just laugh and laugh and we forget we’re at work, so we get on really well. There are so many fun characters.

AX: Have you had a reaction from your friends about the show?

GEORGE: I recently went to see my doctor and he couldn’t stop raving about the show and he absolutely loved the show, so I think if a doctor loves the show from a medical background, I hope we’re getting somewhere.

GEORGE: Yeah, I think so.

AX: When you were coming up as an actress, did you envision yourself as the star of a successful TV series?

GEORGE: As a midwife [laughs]?

AX: Did you think you were going to be doing theatre or film, or …?

GEORGE: I started off in theatre, and I’ve always loved the Fifties, so for me, it was a perfect casting. I was so happy when I got the [MIDWIFE] scripts and it’s something that I’m really proud of and that I really hope lasts for a long time.

AX: Is there anything else you’d like to say about CALL THE MIDWIFE?