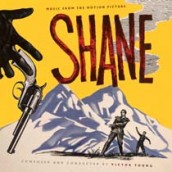 After releasing Jerry Goldsmith’s entertaining scores to STAGECOACH and RIO BRAVO, La La Land Records’ wagon train hits a bona fide western classic with “Shane.” Perhaps no film, or score better personified the lone gunfighter in white than this legendary collaboration between filmmaker George Stevens (GIANT) and composer Victor Young (THE QUIET MAN). The musician had plenty of experience on the range with scores like STREET OF LAREDO and RIO GRANDE. And while Stevens had served as he’d ridden it as a director since his time spent in 1935 with ANNIE OAKLEY. Stevens couldn’t have hoped for a more iconic musical soundscape than what Young provided for this intimate tale of a range war, an acclaimed score that finally has been mined in its full glory from the Paramount peak.

If Lassie packed a six-shooter, it might give you some idea of the tender relationship between Brandon De Wilde’s wide-eyed farmer’s kid and his warm, protective bonding with Alan Ladd’s nice-guy gunfighter who ends up at the family homestead. It’s this sweeping, emotional viewpoint that provides the thematic bedrock for Young’s warm, often bucolic score that reveals more about the soft-spoken good guy’ humanity than the character ever would. Singing with the Americana BIG COUNTRY symphonic sound that would later be taken to market by Jerome Moross (as well as adding a “Varsovienne” dance feel to reflect Young’s Polish heritage), “Shane” is replete with the regional trademarks of harmonica and guitar, a lush tone that’s about the bond between the farmers and the land they’ll fight and die over. What makes SHANE particularly interesting is that the cattle barons who’ll ultimately bite the dust share that same attachment, and Young is sure to give the musical shades of grey for both the good and bad guys. But when it comes to the steely-eyed Jack Palance, Young’s snarling, brassily menacing music would be just as apropos if it were attached to a monster movie score from the period, making Shane’s heroic orchestra all the more impressive when taking on the black hated desperado.

SHANE sounds mighty fine for a gunfighter who’s nearly sixty years down the trail, with La La offering a harmonica version of “Beautiful Dreamer” and film versions of “Ride To Town” and “End Title,” the swelling, heartbreakingly sweet theme ingraining a boy’s cries for Shane to come back into movie history. Top it off with Jim Lochner’s impressively researched liner notes, and you’ve got an album that pays due to this righteously enduring score and film that spelled out why a man’s gotta do what a man’s gotta do like few other pictures that strapped on six shooters.