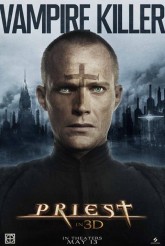 A motorcycle with training wheels? Ouch.

During the PRIEST press event at WonderCon 2011 in San Francisco, Paul Bettany’s co-star Cam Gigandet threw him under the bus about an embarrassing moment where he had to have training wheels installed on his bike because it was too dangerous to ride.

Of course, ASSIGNMENT X had to ask Bettany about it.

“I had this big ass bike, and I was allowed to ride it if only it was a straight line,” Bettany says. “But when a stuntman came off the bike at about 35 miles per hour, they said that they weren’t too sure about me being up there. So they put trike wheels on the bike. It was that or they were going to shut down production. It was a f***ing death trap. It was a monster bike but I never really felt unsafe (laughing).”

So when did he feel unsafe?

“The most unsafe I have felt was when we were shooting along a salt flat and had a truck pulling a train carriage behind (which will become a full train in post-production) and I have a wire attached to my back and am on a bike. And there’s a f***ing camera car between us. I thought ‘What the f*** am I doing on here?’ Then they told me to stand up on the bike and I did it like a moron.”

PRIEST about a warrior priest who wipes out vampires opens May 13 in 3D.