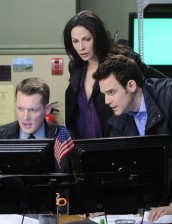 Myka gets resolution with her past and J. August Richards guest stars!

After the ending of last week’s episode of WAREHOUSE 13, I really expected some big shake ups from all of the robotic bug critters that had been loosed in the Warehouse. Surprisingly enough, that isn’t even touched on in the new episode “Past Imperfect.” There are elements of the evil Warehouse crew about in this episode, but they take a back seat to a re-visiting of Myka (Joanne Kelly) and her greatest failure; her inability to save the life of her lover and fellow Secret Service agent Sam Martino (Gabriel Hogan).

Myka and Pete (Eddie McClintock) are investigating a completely unrelated artifact event in Denver, Colorado when she by chance catches a glimpse of the man who shot her partner years ago. She tries to catch up to him but he gets away in the crowd and she has to go save Pete from the artifact they were sent to collect. Myka and Pete then make their way back to her old offices to enlist the help of her former teammates.

Continuing the trend of WAREHOUSE 13 to feature actors and actresses from other genre television shows, this episode has J. August Richards turn up playing the head of Secret Service investigations agent Zach Adanto. It is nice to see J. August, and it’s been a looong time since I watched him faithfully on ANGEL. Again, it’s always a nice perk to see names in the credits as the episode starts, and then to sit and wait to see who they are playing in the episode and how they figure into the larger scale of the WAREHOUSE 13 universe.

This episode also has a subplot involving the shadow Warehouse agents (as stated above) and it causes Artie (Saul Rubinek) to have to don a psychic fez to mind link with a dog that saw the license plate of the car that ambushed Jinks (Aaron Ashmore) and Claudia (Allison Scagliotti). This of course leads to the more comedic moments of the episode and to poor Claudia to have excessive drooling for 24 hours.

I really like the dynamics that are being built and established between all of the different characters this season. Old relationships such as Pete and Myka are being refreshed and reinforced, and new relationships involving Jinks and his interactions with everyone at the Warehouse are really well written and fun to watch.

This was a particularly nice episode, simply because we’ve dealt with a lot of aspects of several of the characters’ pasts, but we’ve never tackled Myka’s head on like this. It was good to see her get some closure with her partner’s death, to be able to get the guys responsible, and to even make peace with her partner’s ex-wife. Plus the flashback sequences are fun because Myka has her curly hair again.

The episode ties back to the shadow Warehouse agents and Artie, Jinks, and Claudia now know that FBI agent Stukowski (Ashley Williams) is actually evil. Where we go from here is anybody’s guess and maybe next episode we’ll see what those insect robots are doing in the Warehouse!