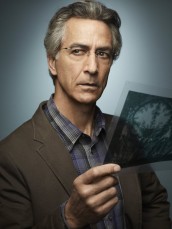 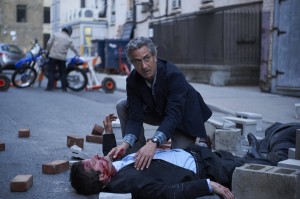 The title of Syfy’s  Monday night series ALPHAS refers to individuals who have a variety of unusual mental abilities. Dr. Lee Rosen, played by David Strathairn, is in charge of a team of five disparate Alphas. The U.S. government expects the Alphas to track down and combat others who are using their talents for destruction. Rosen tries to comfort and advise his charges, but he’s aware that he’s also manipulating them.

Rosen is a complicated character, but fortunately, Syfy has Strathairn in the role. San Francisco native Strathairn (pronounced, says the actor, Strath-hairn) has an enormous film and television resume that includes an Oscar nomination for Actor for his work as real-life newsman Edward R. Murrow in 2005’s GOOD NIGHT, AND GOOD LUCK. Strathairn is also beloved by cult audiences for his role as blind sound technician Whistler in the caper film SNEAKERS, which he says ALPHAS very loosely resembles.

ASSIGNMENT X: What attracted you to ALPHAS as a project?

DAVID STRATHAIRN: Well, I felt the set-up was dealing with some stuff that hasn’t been tapped yet in terms of the evolution of our brains and what’s happening in terms of integrating with these kinds of [developments] – it’s a very serious issue in science

AX: Did you talk to neuroscientist Oliver Sachs?

AX: Is ALPHAS based somewhat on Sachs’ writings and his findings about the human brain?

AX: Did you find anything in his writings especially interesting in relation to ALPHAS?

STRATHAIRN: First of all, they’re great stories and fantastical, but then when you look around, any one of us might have some of those things going on. It’s totally a plausible situation.

AX: We know that Dr. Rosen is technically in charge of his group of Alphas, but there are people who seem to be above him in government. How much autonomy does Dr. Rosen have?

STRATHAIRN: It’s sort of undefined, but he has to answer to a large organization. It has come to him because of his particular expertise to put together a team like this to encounter or counter similar elements, Alphas who are being used for nefarious purposes. And also to discover the possibilities simply in a research way about these people.

AX: Is the primary drama for Rosen that he sometimes disagrees with the people above him in what actions he should take, or is the primary drama in trying to ride herd on these five very different Alpha people he’s in charge of, or is it both?

STRATHAIRN: It’s both. He has his own agenda, in terms of as a research scientist, he has his own wish to explore the mind in an objective way by using these people, but also cares about them deeply as people. And yet he also has to answer to a higher authority, so he’s between a rock and a hard place. 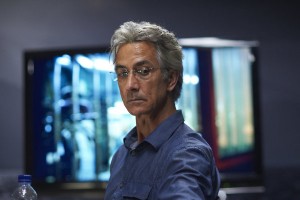 AX: Do you see any similarities between ALPHAS and SNEAKERS, in that they’re both about groups with unusual powers?

STRATHAIRN: Yeah, it’s SNEAKERS with Alpha powers. There’s sort of a complicated relationship and that humor and the case – they go on a caper. Definitely with these people, there are more heightened anomalies than those in SNEAKERS.

AX: Do you see any similarities between ALPHAS and GOODNIGHT, AND GOOD LUCK? Obviously, there are major differences, but in both, you’re playing somebody who is up against very, very powerful people and your character has an objective that isn’t quite the objective or his bosses.

STRATHAIRN: In that context, yeah, there’s probably some similarity, but I think it’s pretty slim, because Edward Murrow was surrounded with really capable people.

AX: You have not done a lot of science-fiction/fantasy genre projects before ALPHAS. You did BROTHER FROM ANOTHER PLANET with filmmaker John Sayles [Strathairn’s friend – the two work together frequently] quite awhile back. But is the genre something that just didn’t appeal to you or is it just that other parts were what came up?

STRATHAIRN: I never was really curious, because it was so fantastical and the bells and whistles felt a little … green screen is a beast unto itself. But frankly I don’t look at this [as science-fiction], although this is on the Syfy Channel and I think it’s great that it is, because I think it will find an audience there that is much more discerning than if it were thrown into a network situation, but I don’t look at it as science fiction as much as a – I’m trying to find the right words. It’s definitely an ensemble piece. That’s what I love about it, and that anybody’s carrying the ball at any given moment and the ball that they’re carrying is quite various. It’s just a shape-shifter of a show, but it’s grounded in some real plausibility and some real stuff and what I respond to is that.

AX: What is that difference?

AX: You’ve also served as narrator a project called ODYSSEUS IN AMERICA. What is that?

AX: You’re also in the upcoming NO GOD, NO MASTER …

STRATHAIRN: I play an actual person. He was a policeman, a detective inChicago in the 1920s, about the Palmer raids and anarchism and the Wall Street bombing and all that.

AX:And do you think there’s any particular message within ALPHAS?

STRATHAIRN: I think the message will discover itself. I think audiences are going to get a lot of messages with this. It’s not one particular intention that the creators have – I think they look at it with several ways to go. I think there’s also a little bit in this show for those people who are curious about the evolution of this thing we call our mind.