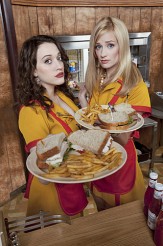 A familiar sitcom with two bright leads and horrible writing

You can’t stop mediocrity. Every year, half of the new shows wallow in a sameness that you can never quite escape. Whether it’s the umpteenth drama featuring cops or doctors or the 10,000th comedy featuring “friends.”

CBS launches 2 BROKE GIRLS which is another one of those “friends” shows about two girls who are broke who strike up a friendship and try to find a way out of their horrible existence.

It’s tolerable, in a bland sort of way – enhanced by the likability of the two leads – Kat Dennings and Beth Behrs who are clearly going to steer the show, for better or for worse  in spite of uninspired writing and stereotypical supporting characters.

Dennings plays Max Black. She works in a Brooklyn diner, has a sharp tongue and makes a killer cupcake. When the latest waitress is fired, the boss hires Caroline Channing (Behrs). She’s the spoiled heiress to a mogul who ran a Ponzi scheme. All their assets were frozen and she’s broke. The only way to survive is to work – so she finds a place far away from Manhattan (so no one can see how far she’s fallen) to start over.

At first, Max despises Caroline, but soon, the two form an unlikely friendship and by episode’s end they’re quasi-friends.

Both Dennings and Behrs are quite good. Their characters are well-rounded enough that they could salvage the series for a few episodes as it tries to find its footing.

The inherent problems with the show are clear – the writing by Michael Patrick King and Whitney Cummings is thin and rather unoriginal.

The moment Caroline storms into the diner wanting to wear her designer clothes (and now cut off from her riches), you can’t help but be reminded of Jennifer Aniston’s spoiled Rachel in the first episode of FRIENDS.

The one-liners, the gags – they’re not really here.

Plus, King and Cummings create the cardinal sin of sitcoms – racial stereotypes. You have the owner of the diner Han Lee (Matthew Moy) who just changed his name to Bryce Lee. He speaks in a thick, hard-to-understand Asian accent and it’s just not funny.

Oh, and it gets worse – the cook is a Russian horndog named Oleg (Jonathan Kite) who doesn’t do much either.

It’s great to have ethnic diversity in sitcoms, but why does it also result in having that ethnicity part of the joke? It doesn’t work anymore.

The only supporting player with any bite is former original SATURDAY NIGHT LIVE performer Garrett Morris who plays cashier Earl. He’s not given much to do, but there’s a nice chemistry between him and Dennings. Hopefully this gets further explorations in future episodes.

While 2 BROKE GIRLS seems to be moving toward an end game – the potential for the two of them to start their own business making cupcakes, the series has a ways to go in finding its rhythm and stride. The pairing of Dennings and Behrs is the best thing about the show. If they continue to make it about them and their misadventures, it might survive. If they get bogged down in the show’s racial stereotypes and bad gag writing, not even veteran director James Burrows will be able to salvage a full season out of this hot mess.